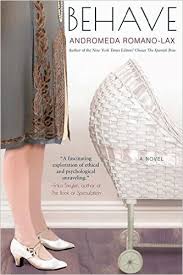 Creative inspirations bubble from diverse places, but recently I’ve discovered a new authorial font. Many writers seem to be imagining stories of women whose real lives intertwined with an illustrious mate. Sometimes these women were themselves famous, and thus any fictional version of a life must remain true to fact. Anne Morrow Lindberg, in Melanie Benjamin’s The Aviator’s Wife, for example. Others were well-known adjuncts, like Mamah Borthwick in Nancy Horan’s Loving Frank or Hadley Richardson in Paula McLain’s The Paris Wife. Still others, however, led existences far more obscure, and thus a novelist can be quite original when telling their stories. Such is the case in Andromeda Romano-Lax’s new novel, Behave, in which she describes the interior life of Rosalie Rayner Watson.

Nearly a century ago, John B. Watson was regarded as a premier scientist in the new-born field of psychology. In 1913 he published what became known as the behaviorist ‘manifesto’, “Psychology as the Behaviorist Views It.” Later, he wrote a seminal textbook, Behaviorism, and a controversial parenting guide, Psychological Care of Infant and Child. His career, in the meantime, was clouded by scandal. A man who loved women, Dr. Watson lost his academic position at Johns Hopkins because of an affair with a graduate student, an affair publicized in excruciating detail by his angry wife. Later in life, his reputation suffered anew when questions were raised about the validity of his early laboratory experiments on children and about the rigidity of his hands-off views on parenting.

Rosalie Rayner experienced every moment of the controversies surrounding this notoriously flawed man. A graduate of Vassar and an eager would-be behavioral scientist, she went to graduate school with stars in her eyes. Working in the laboratory of the renowned Dr. Watson, she quickly succumbed to his charismatic persona. As the novelist imagines her thoughts, Rosalie understood her mentor’s flaws and his weaknesses, knew of his countless romances, and even anticipated some of the problems with his research, but she nonetheless fell for his patter. Hard.

Even after she became Mrs. John B. Watson, Rosalie allowed herself to serve as her husband’s handmaid, ignoring subsequent affairs, obeying his guidance while raising their own children, and—believe it or not—typing and revising and editing all of his scholarly work. A smart young woman, she became an appendage, and that is the existence that Romano-Lax details in Behave. Rosalie, indeed, behaves, exactly as Dr. Watson dictates, at least on the surface. Her interior life? That’s what Romano-Lax imagines. What, exactly, did Rosalie know? And how might she have processed that knowledge?

Behave is told from Rosalie’s point of view. It is a marvelous character study, first of a naïve teen-ager and then of a maturing woman. Her growth is subtle. Sometimes I wanted to shake her, while at other times I sympathized with her hesitancies, her behind-the-scenes manipulations, her acquiescences, her outright rebellions. In truth, little is known about Rosalie other than her surface existence as mistress and later as wife and mother. Romano-Lax brings her to life with stunning insight. When I finished reading Behave, I felt like I had been sharing secrets with a real person, not a fictional characterization of someone who lived a very long time ago. I also felt I had learned a great deal about the earliest conceptualizations of behaviorism, and I always like books that teach me something new.

So I’m giving Romano-Lax’s novel my highest accolades. And once more, I’m recommending a novel with book club potential. How intriguing to discuss the embryonic growth of behaviorism, and to talk about its weaknesses and strengths. What fun, too, to argue over Rosalie’s choices, each one difficult and heart-rending and altogether too real. – Ann Ronald 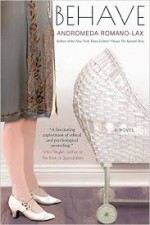 Ann Ronald is a retired English professor from the University of Nevada, Reno. Author of dozens of reviews, she’s also written a number of books about the American West. They include literary studies such as The New West of Edward Abby and Reader of the Purple Sage, cultural studies such as GhostWest and Oh, Give Me a Home, and nature writing such as Earthtones: A Nevada Album. Her latest is a work of fiction, Friendly Fallout 1953. Since retiring, she’s been reading vociferously, so “Bookin’ With Sunny” is giving her a wonderful opportunity to share thoughts about her favorite new discoveries.
More from this reviewer
PrevWhat She Left
LazarettoNext