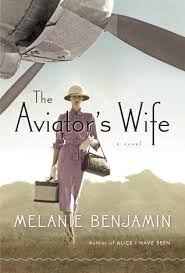 When Anne Morrow, the daughter of well-do-do parents, graduated from Smith College, she immediately married an American icon, Colonel Charles Lindbergh, the man who recently had flown solo across the Atlantic Ocean.  She became “the aviator’s wife,” not just an aviator’s wife, but the aviator’s wife; her husband—“Lucky Lindy”—was idolized throughout the world.  Melanie Benjamin’s aptly titled novel, The Aviator’s Wife, interrogates Anne’s innermost thoughts as the young woman and wife struggles to secure a place for herself alongside Charles’ heroic, larger-than-life figure.

Although Anne left letters and diaries, and even published nonfiction, no one knows for sure exactly what she was thinking as her marriage unfolded.  Benjamin follows Anne through many familiar passages—Anne’s own prowess as an aviator and navigator, the horror of the eldest Lindbergh baby’s kidnapping and death, the births of their other five children, the Lindberghs’ flirtations with Hitler and Nazi Germany, the couple’s long-distance relationship in their later years—visualizing these events fictionally, from Anne’s interior point of view. The story of The Aviator’s Wife comes through Anne’s heart and mind, Anne’s imagined consciousness, Anne’s efforts to love her iconic husband, to accommodate his wishes, and finally to carve out a meaningful life.

The Lindberghs married after a very brief courtship. They didn’t know each other very well. I daresay that Charles seemed more attracted to his bride’s family circumstances than to the real-life woman he chose to wed. He soon proved to be a difficult spouse, always in the limelight, expecting everyone to defer to his wishes. He made lists, assuming his orders would be followed. He dictated Anne’s every move, training her to be his co-pilot, keeping her alongside him though always in the shadows, then turning her into his “brood mare,” as he often described her. He wasn’t particularly affectionate, especially in public, and he often retreated into silence. If Benjamin’s reconstruction of Anne’s thoughts are correct, no one ever really penetrated Charles’ austerity.

But Anne did understand her spouse, acknowledging her dependency and her acquiescence to his wishes. Throughout the novel, she often refers to Polaris, the star whose gaze reminded her of her husband’s.  I found Benjamin’s adjectives for that gaze quite intriguing, for sometimes it is an “icy gaze” but more often it is a “bright, unwavering gaze,” one Anne always steers by. Recognizing her husband’s foibles, Anne nonetheless remains devoted.  As the novel progresses, however, cracks appear. Charles’ behavior throughout the infamous kidnapping of their son demonstrates how destructive his rigidity and his egotistical sense of self could be. After that tragedy, Anne never looks at her husband in quite the same way again.

Or at least Melanie Benjamin’s Anne Morrow Lindbergh no longer sees her fictional husband through rose-colored glasses. The brilliance of The Aviator’s Wife is the way Benjamin interprets the ostensible facts by getting inside Anne’s imagined psyche. Benjamin encourages the reader to ruminate along with her contemplative character. What must it be like to be married to an icon? To be followed everywhere by photographers and an adoring public? Many authors have attempted to reconstruct the relationships strong women have had with famous men.  I’ve recently reviewed several (Under the Wide and Starry Sky, The Paris Wife, Flappers) for “Bookin’ with Sunny.” The Aviator’s Wife is one of the very best I’ve read, perhaps the most provocative and certainly the most intellectually and emotionally stimulating of all. What must it be like to be a flesh-and-blood woman married to an icon?    – Ann Ronald

Also available by Melanie Benjamin: Mrs. Tom Thumb; Alice I Have Been. 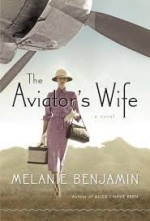 Ann Ronald is a retired English professor from the University of Nevada, Reno. Author of dozens of reviews, she’s also written a number of books about the American West. They include literary studies such as The New West of Edward Abby and Reader of the Purple Sage, cultural studies such as GhostWest and Oh, Give Me a Home, and nature writing such as Earthtones: A Nevada Album. Her latest is a work of fiction, Friendly Fallout 1953. Since retiring, she’s been reading vociferously, so “Bookin’ With Sunny” is giving her a wonderful opportunity to share thoughts about her favorite new discoveries.
More from this reviewer
PrevA Spy Among Friends
When Books Went to WarNext