A Spy Among Friends 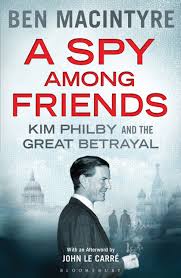 A Spy Among Friends: Kim Philby and the Great Betrayal

Grip this book or your e-reader and turn to page one. Buckle up. Expect turbulence. Prepare to be buffeted but riveted. It’s a hell of a ride.

Over simplified but necessary background: MI5 and MI6 are two British intelligence agencies. MI5 is roughly equivalent to the FBI—internal intelligence; MI6 is closer to the CIA—external intelligence. Established in 1909, both predate the FBI and CIA by a number of decades. MI6, for much of its history, didn’t officially exist. This story is about some spectacular failures on the part of both MI5 and MI6, MI5 for not catching some internal double agents and MI6 for protecting them.

Briefly, this is the story of Kim Philby, a British double agent who betrayed secrets to the Soviet Union for nearly thirty years. It’s also the story of his betrayal of any number of his friends, especially his friend of nearly thirty years, Nicholas Elliott, fellow MI6 spy. Philby was responsible for sabotaging numerous undercover plans, the deaths of dozens of operatives and would-be defectors, and routinely turning over a flood of secret documents to his KGB handlers. During these years, he went from being a Cambridge undergraduate student to a senior MI6 official, always under the guidance of his communist minders. For two years beginning near the end of World War II, he was responsible for the MI6 department charged with conducting intelligence operations against the Soviet Union. He was able to give advance notice to the Soviets about Britain’s and often America’s Cold War plans directed against the Soviets. Thirteen years after two of his fellow double agents, Donald Maclean and Guy Burgess, “exfiltrated”—spy talk—to the Soviet Union and were given asylum, Philby was finally collared by his much-betrayed friend and MI6 colleague, Nicholas Elliott. It is likely that Elliott, after extracting a confession from Philby in Beirut in 1963, showed him an open door by which he, too, could defect to the Soviets. Like many other important issues in this book, however, this conclusion is only speculative.

Although Macintyre has read the published accounts (histories, memoirs, newspaper stories) covering these outrageous personalities and storied events, his conclusions, while plausible and even persuasive, are speculative. The KGB, MI6, MI5B and CIA files that would provide documentary evidence are lacking. For example, James Angleton, the American expert on the Soviets, had dozens of meetings (booze, food, tobacco) with Kim Philby while Kim was the MI6 liaison in Washington, D.C. from 1949-1951. Angleton kept complete minutes of these meetings in which he summarized detailed conversations with Philby about dozens of classified issues. After Philby defected, Angleton (it is surmised) burned the minutes so that he could claim for the next thirty years that he suspected Philby all the time and had not divulged anything of real importance. Baloney. It seems that spy agencies, when they don’t keep their files perpetually Top Secret, often destroy them.

A Spy among Friends is an absorbing book offering stories of sex, booze, betrayal, suspense, and other risky behaviors. It appears that two things were crucial to become successful in MI6—drink like a fish and be from the right school. After betraying his country and friends for three decades, Philby bequeathed his school scarf to his wife before fleeing to the Soviet Union. In MI6, vetting new recruits in the 1930’ and ‘40’s often consisted of being nominated by an uncle, family friend, or military officer who knew that “one was of the right sort.” One did not apply to MI6; one was selected. It was much like being asked to join an exclusive club. When an MI6 operative went rogue there was a strong tendency to close ranks and deny. If you are the least bit interested in witnessing the Old Boy System in operation, this book will provide chapter and verse.   –   Neal Ferguson

Also available by Macintyre: Double Cross; Operation Mincemeat; The Last Word; For Your Eyes Only; Agent Zigzag; The Man Who Would Be King; A Foreign Field; The Napoleon of Crime; Forgotten Fatherland. 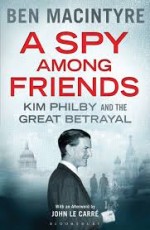 Neal Ferguson is a self described Anglo-phile. After studying for a PhD in British history and doing research for a year in various British archives, he came to the University of Nevada in 1970 to teach. Soon he found himself in administration where he remained until 2003. After returning to full-time teaching a decade ago, he decided to concentrate his teaching energies on Medieval British history and various global aspects of World War II. Dedicated to Ambrose Bierce’s proclamation that the purpose of war is to teach Americans geography, Neal insists that his students accompany him (in class) to sundry east European rivers and steppes, African deserts and jungles, south-east Asian mountain ranges and peninsulas, and small islands and coral reefs in the Pacific. Currently he is writing a book about the ups and downs of General Douglas MacArthur’s military reputation.
More from this reviewer
PrevThe Maid’s Version
The Aviator’s WifeNext