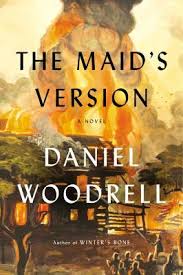 Last month Sunny posted a blog she wrote when she finished reading Daniel Woodrell’s novel, The Maid’s Version. She mused about Woodrell’s unhurried language and diction, the elongated sentences, the languid clause after languid clause, the words carefully chosen to evoke and recover an aura of times past. I fully agree with Sunny’s assessment. Woodrell’s prose echoes perfectly not only the content of the story he is telling but the dispositions of those characters who are recounting what happened when, and why.

In 1929 a dance hall explosion in rural Missouri killed forty-two citizens and scarred their families forever. Alma DeGeer Dunahew, then a maid in the home of the local banker, lost her sister in the conflagration and soon loses her mind trying to disentangle the stories surrounding the tragedy. The Maid’s Version centers on Alma’s recollections of the past, but occurs in the present, as she is telling her twelve-year-old grandson what she believes she knows. So Woodrell’s prose echoes Alma’s measured cadences, replicating the way an elderly woman might spin a tale for a young listener, backing and filling, abruptly changing the subject, doggedly returning to long-lost thoughts and threads.

Woodrell’s prose does not move rationally. Rather, it ambles and amplifies, it falters and fumbles, it stops and starts. It also echoes how a boy might hear his grandmother, how he might stretch her words, how he might daydream and lose a chain of thought, how he might reinterpret and reinvent. Other characters contribute observations, too. The effect resembles a collage, where recollections stick and stack on top of one another. No single image or sentence or page is absolutely accurate, but the whole adds up to far more than the sum of its parts.

Woodrell has a knack for characterizations, too. I felt like I knew these people intimately, their dreams and their fantasies, their foibles and their nightmares. Even Alma’s sister comes to life, though she has been dead for years and years. Her sensuousness and her sexuality still attract the reader, just as they enticed multiple men in her lifetime, “men smitten by her lyric eyes and fluctuating mounds and scented sashay.” Other local color characters are sharply drawn, too, like Mr. Isaiah Willard, “a jackleg preacher, a man of hard convictions.” Or the Rooshian, “Venjamin Alekseyevich Cherenko” who gathers in Alma’s derelict boy, John Paul, as his “replacement son.” Or Arthur Glencross, the banker, “a man with some intriguing qualities, being given to wayward romance and possessing volcanic potential.”

Like Sunny, I find it hard to write about The Maid’s Version without quoting passage after passage of Woodrell’s delectable prose. I agree with her, too, that his writing reminds me of William Faulkner’s. I would add, however, that The Maid’s Version carries overtones of modern speech missing from Yoknapatawpha prose. In both cases the targeted meandering reproduces both character and action, but Daniel Woodrell’s cadence and lingo simply sound more up-to-date. One brief example, crazy Alma, “her brain turned to diseased meat by the unchecked spread of suspicion amidst a white simmering and reckless hostility.” Readers who admire Faulkner ought to try some Woodrell, too. But I think many other readers—even those of us from the West, where our cadence canters more crisply and our lingo rarely languishes at all—will find Woodrell’s writing worth pursuing.   – Ann Ronald

Also available by Daniel Woodrell: Winter’s Bone; The Bayou Trilogy; Tomato Red; Woe to Live On; The Death of Sweet Mister; Give Us a Kiss; The Outlaw Album; Muscle for the Wing; The Ones You Do; Under the Bright Light. 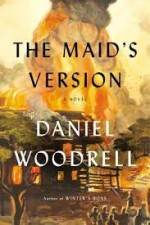 Ann Ronald is a retired English professor from the University of Nevada, Reno. Author of dozens of reviews, she’s also written a number of books about the American West. They include literary studies such as The New West of Edward Abby and Reader of the Purple Sage, cultural studies such as GhostWest and Oh, Give Me a Home, and nature writing such as Earthtones: A Nevada Album. Her latest is a work of fiction, Friendly Fallout 1953. Since retiring, she’s been reading vociferously, so “Bookin’ With Sunny” is giving her a wonderful opportunity to share thoughts about her favorite new discoveries.
More from this reviewer
PrevCarol and John Steinbeck
A Spy Among FriendsNext