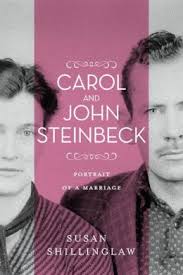 Carol and John Steinbeck, Portrait of a Marriage

I’d been on a Steinbeck jag (reviewing Steinbeck’s Ghost, rereading The Long Valley, browsing through Harvest Gypsies, and finally reading Obscene Extreme, the Burning and Banning of John Steinbeck’s The Grapes of Wrath) when I saw UNR Press had published Carol and John Steinbeck, Portrait of a Marriage. I immediately begged for a review copy. Shillinglaw’s book about a young Steinbeck bursting at the seams, romantically, intellectually and politically, is another reason never to pass up what university presses, in this case, University of Nevada Press, offer the general reader, as well as the academic.

Susan Shillinglaw, scholar in residence at the National Steinbeck Center in Salinas, is a professor of English at San Jose State University, and from 1987 to 2005 was Director of its Center for Steinbeck Studies. Had she written her Steinbeck book when I attended SF State U., I might have better understood why no Steinbeck titles, not even his short stories, were included in any of the survey of American Lit classes I took. Why most universities leave Steinbeck’s work to be studied in high schools is beyond me and short-sighted, at best. If you are a Steinbeck fan, Carol and John Steinbeck is a book you will not want to miss.

Salinas is the town most often associated with Steinbeck, but what about Pacific Grove, Los Gatos and other nearby Bay Area communities? Carol Hennings Steinbeck (born 1906) was a local girl, born and raised in San Jose. In her day, “Carol reinvented herself, undergoing a metamorphosis from gawky high school wallflower to career girl.” In the 1920s “New Women were ambitious, sassy, and sexually liberated.” Carol was a “hell-raiser. . . . she smoked freely, swore energetically,” and in general was just right for John Steinbeck when they met at Lake Tahoe in 1928. Steinbeck himself was all about breaking rules. “The only advantage I can see about writing at all is to try to overturn precedent.”

The book’s title is most appropriate because Shillinglaw paints a portrait, a very intimate one, of the years of John Steinbeck’s first marriage. The young couple lived “pared-down” in Pacific Grove for five years. Carol worked, John wrote. Carol was the driving force behind John’s early writing. The couple’s life opened up in ways scientific and philosophical when marine biologist Ed Ricketts entered their circle of friends. Steinbeck absorbed the political, intellectual and societal changes that were central to his and Carol’s relationship with Ricketts and Ricketts’ friends.

We know that Steinbeck married three times, that Carol Hennings was his first wife. But first times for anything are important, the dinner parties with their closest friends, indiscretions, arguments over money, dealing with writing successes and failures. Carol put her own writing and other creative inclinations (art, poetry) on hold while encouraging John’s writing. Shillinglaw does not flinch from the couple’s flaws, both John’s and Carol’s, but neither does she hide their strengths.Theirs was a marriage almost as fated to succeed where it did, as to fail where it failed. Carol, as well as Ed Ricketts was a cornerstone of Steinbeck’s early writing life.

Carol and John Steinbeck doesn’t end with their divorce. Instead the author follows both John and Carol to their deaths. The first and last stanza of Poltergeist, the last poem Carol pasted in her scrapbook before her death in 1983, indicates she never lost her spirit: And when at last I join the myriad dead,/I prey you, no tall candles burn,/Nor weep till your beloved eyes are red,/But rest assured in knowing I’ll return./ . . . Successor there may be, and simply grand,/But when you start to tenderly enfold her,/Just remember, kid, I’ll be on hand,/Leering at her over your left shoulder. It is not a leap to imagine she might have been referring to Steinbeck and not her current husband. Steinbeck, who died in 1968, wrote to his sister ten years before: “’I’ll probably have a pencil in my hand when they lay me out. I hope so.’” Shillinglaw then adds: “Both sketched their own ghosts, the wit and the writer. Maybe the two are leering and peering over our left shoulders, wrangling still.” With great depth and warmth, Shillinglaw profoundly enriches our appreciation of the man, John Steinbeck and the woman, Carol Hennings, who played a major role in his life.    – Sunny Solomon

A shorter version of this reviewed appeared in the Clayton Pioneer, in Clayton, CA.

Also available by Susan Shillinglaw: On Reading the Grapes of Wrath; A Journey into Steinbeck’s California; Steinbeck and the Environment (with Susan F. Beegel); How to Organize a Steinbeck Book or Film Discussion Group; Beyond Boundaries: Rereading John Steinbeck (with Kevin Hearle). 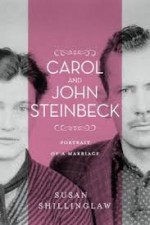 Sunny Solomon holds an MA in English/Creative Writing, San Francisco State University. She is a book reviewer for “The Clayton Pioneer” and her poetry and other writing has been published in literary journals, one chapbook, In the Company of Hope and the collection, Six Poets Sixty-six Poems. She was the happy manager of Bonanza Books, Clayton, CA and Clayton Books, Clayton, CA. She continues to moderate a thriving book club that survived the closure of the store from which it began. Sunny currently lives next to the Truckee in Reno, NV.
More from this reviewer
PrevWrath of the Caid
The Maid’s VersionNext