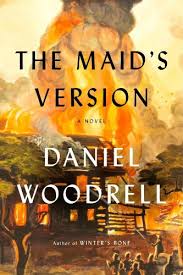 Slow talking is what you find in southern stories, in the author’s own unhurried voice or that of any one character, and quite often the reader doesn’t realize until far into the tale that something very special has passed her way. That’s a bit narrow – maybe not just southern stories, but stories that come from small towns like West Table, Missouri, in Daniel Woodrell’s book The Maid’s Version. The Maid’s Version moves at a pace that would be plodding in lesser hands.

“She frightened me at every dawn the summer I stayed with her. She’d sit on the edge of her bed, long hair down, down to the floor and shaking as she brushed and brushed, shadows ebbing from the room and early light flowing in through both windows.”

The whole first page is one glorious paragraph. We don’t know who “she” is or who “me” is, only that she has very long hair, that she’d been a farm girl and a maid, and hadn’t cut her hair in decades. We know nothing of “me” except that he was probably young and extremely observant, taking the same amount of time to make those observations as “she” took to brush her hair that “was as long as her story.” Even the word “frightened” is slower and less harsh than “scared” might have been.

This is not a review of Daniel Woodrell’s ninth book; rather it’s what occurred to me as I read this gem of a very short novel. I’m going to leave the review to Ann because I know she will do it more justice that anything I might come up with. What I can say about the story, without any spoilers, is that in 1929 a dance hall, filled with dancers, exploded in a fiery inferno that took more than forty lives, and for more than three generations the person who set the fire that ignited the explosion has remained a mystery.

Reading so many one-paragraph pages reminded me of Faulkner’s short story, “Barn Burning,” when Salty runs and runs to warn de Spain about his father’s intentions. The difference between this and Faulkner’s one-page paragraph (and that paragraph may have actually been one long sentence) is that Faulkner’s reader is almost out of breath by the time the paragraph ends, whereas in Woodrell’s writing, the paragraphs are measured and slow, as if giving additional descriptions or information a chance to “catch up” and be included.

Woodrell can elongate a sentence to encompass multiple pieces of the story: “Glencross could not have his Lincoln Phaeton seen parked in front of country hotels, highway motor courts, cabins at the river, and under no imaginable circumstances would it be proper for Ruby DeGeer to be seen alone in his company – any scandal provoked by his Phaeton being noticed where it ought not be, or even whispering of a possible scandal might cripple or sink a banker in a town so small, and he found his public ease now at no other level but the heights and was not willing to fall.” In one sentence, it becomes clear that banker Glencross is having an improper relationship with Ruby DeGeer, she is obviously of a lower social state, everybody in town would recognize his car, to be seen with Ruby would put his very job in jeopardy, and he values his standing in the community more than anything else.

I can’t remember any writer packing so much story into so few pages. The Maid’s Version is all of 164 pages, yet within that brevity, Woodrell includes characters from every social level of West Table. Each one – sometimes only two or three lines – reinforces the seriousness of the tragic fire that touches so many families. The person who started the fire may never have been arrested but for more than sixty years, citizens of West Table have passed along their suspicions, have held tight their secrets.

And now, the morning after having written the above thoughts, I’ve awakened to a final insight about Alma, the woman whose hair is so long it falls to the floor, who is the aged grandmother of the boy watching her brush her hair and is the beloved sister of Ruby, who perished on that fiery night in 1929.

Not only was Alma’s hair as “long as her story,” but “she couldn’t walk when her hair was not woven into dense braids and pinned around and atop her head.” Much later in the story, after the dance hall fire, it was said in town that “Alma believes she knows why and who but can’t do a thing—which is a black curse for a body to carry no matter how you say it.” Her behavior becomes strange and “She let her hair grow too long . . .” Alma has decided to “let it grow on forever, having an immediate hallowed sense that hair of an otherworldly length displayed a public, devotional reverence for the dead, for the dead and her quest to achieve for certain of the dead justice or blood one or both, but especially both.”

Years later, “. . . when Alma became bizarre beyond civic tolerance . . .” she was removed to the Work Farm where she remained for many more years. My waking discovery this morning is that Alma is a living symbol of West Table; every strand of her hair is a member of that town, and without her braiding these members together the town could not walk, and the shadows and light first seen with the brushing of hair are the secrets and truths of West Table and without her braiding, the town itself would fall.

What great fun to read a book that so stirs the imagination in unexpected directions – can’t wait to read what Ann thinks of it.   – Sunny Solomon