Home » Reviews » Fiction » Alice I Have Been

Alice I Have Been 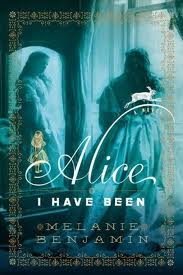 Can you remember when you first read Alice in Wonderland? Ever wonder about Alice? Or how Mr. Dodgson (aka Lewis Carroll) came to write such a wacky and riotous tale?

Alice I Have Been is an intriguing biographical novel of Alice Liddell and begins when Alice Hargreaves, nee Liddell, at age eighty, reflects on her recent trip to America in celebration of Lewis Carroll’s 100th birthday. Ms. Benjamin’s novel is a fictional account of Alice as a child, a young woman and finally an octogenarian looking back on a life fuller than most. Benjamin captures our attention of Alice’s relationship to the shy, stammering young Oxford (Christ Church) don who teaches mathematics while preparing for the deaconate. Dodgson, a very good amateur photographer, has a talent for taking pictures of children (with a preference for little girls). Alice recalls a picture-taking afternoon when, after Dodgson, looked at her, “… with an intense look, almost as if he were afraid I might disappear…” she felt herself, “blush, wondering why I felt so strangely…”

Such an avocation raises all sorts of red flags for today’s reader. Ms. Benjamin picks up each flag and gives it her own spin. Alice’s father is Dean of Christ Church and as such, Mr. Dodgson becomes friendly with the Liddell family. For a period of time he is a frequent and welcome visitor at the deanery. Dodgson, who has a natural affinity for children and especially young girls, entertains Alice and her sisters with stories, riddles and games while visiting at their home or, accompanied by their nurse, on wonderful outings where the stories never stop. With complete approval from Mrs. Liddell, Dodgson also takes photographs of the three girls: the image of Alice, photographed as a scantily clad waif remains in the reader’s mind. Alice reflects on that picture: “That seemingly lovely summer afternoon, when between the two of us, we set out to destroy Wonderland — my Wonderland – forever.” It is a provocative and disturbing memory.

At some point in time, the relationship between the Liddells and Lewis Carroll is severed. Ms. Benjamin, through research and imagination, suggests an explanation in the voice of a young and then mature Alice. Benjamin’s novel of how Alice Hargreaves struggles to make sense of her life beyond the role of Alice in Carroll’s Wonderland is magical reading all its own.   – Sunny Solomon

Sunny Solomon holds an MA in English/Creative Writing, San Francisco State University. She is a book reviewer for “The Clayton Pioneer” and her poetry and other writing has been published in literary journals, one chapbook, In the Company of Hope and the collection, Six Poets Sixty-six Poems. She was the happy manager of Bonanza Books, Clayton, CA and Clayton Books, Clayton, CA. She continues to moderate a thriving book club that survived the closure of the store from which it began. Sunny currently lives next to the Truckee in Reno, NV.
More from this reviewer
PrevThe Mystery of Lewis Carroll
Noah Barleywater Runs AwayNext