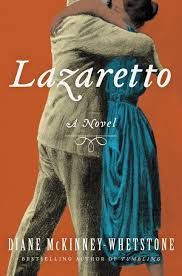 What does it truly mean to be black (or not) and why does it matter? Lazaretto by Diane Mckinney-Whetstone challenges these questions and more.

Lazaretto is based on America’s first quarantine hospital. The Philadelphia Lazaretto was built in 1799 to inspect all passengers and cargo entering the local port for contagious illnesses and quarantine them if necessary. The novel begins shortly after the assassination of Abraham Lincoln (when his body is brought to Philadelphia to be viewed) and continues for several decades.

The events unfold through several different points of view: Meda is a slave who believes her illegitimate child, fathered by her master, has died. Linc and Bram are orphaned brothers who remain inseparable until a confrontation with their employer goes badly, but leads to their escape. Vergilina is the free daughter of a black man and a white woman who remains steadfast in her zeal to prove her identity as a black woman, despite the light color of her skin.

The most common thread through each of these intersecting stories is that of Sylvia, a well-off black woman who is trained and eventually becomes a nurse at Lazaretto. Sylvia comes to terms with the divide between her personal life and her work, which deeply affects her decision to remain unmarried. Her work also accounts for her involvement in the birth of Meda’s child, and the eventual unveiling of what truly happened that day.

Many of the characters come from what America now designates as “broken homes.” Linc, (who is black but appears white) and Bram (who is white) are taken from an orphanage to be house servants under the care of Meda, the only mother they will ever know. Sylvia is entrusted with Vergie, her uncle’s daughter, when Vergie’s mother proves unable to care for her. Nevertheless, each of the featured families loves each other and shows devotion in a manner not always limited to blood relations: “… She [Vergie] would cry to Sylvia when she heard people whispering about how she looked. Sylvia would console her, tell her to ignore people when they said such things, that her family loved her just the way she was, and would love here even if she were a polka dot.”

The question of racial and ethnic identity continues to trouble America, where colorism runs rampant in black communities. Lighter skin tone is supposed by some to lessen a person’s claim to being black. This notion is challenged when that person endures the same struggles of a black person with darker skin living in America. Many of the social implications of what it meant to be black– what it meant to live, work and travel as a black person in the nineteenth century, as depicted in Lazaretto, seem unchanged today.

Each character’s point of view is told from the third person and flows into another character’s storyline. Vergie has a traumatic run-in with white people, but tells no one, leading Sylvia to worry about her. These transitions are seamless; the reader follows the characters as though they were watching people walk through revolving doors in a hotel lobby. Dialogue serves to keep the reader from getting lost in the story, which is helpful in understanding how each of the characters is connected, especially leading up to the major confrontation in the climax.

Mckinney-Whetstone provides insight into the American history of what it means to be black, what it means to be family, and how far some are willing to go to protect their definition of family. For those seeking a tale of homecoming, a quest of unlearning or even new insight into today’s current events, this post-Civil War drama creates a rich connection between history and the present age.   – Brandy Burgess 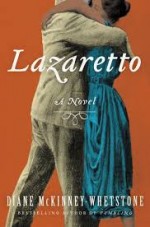 Brandy Burgess holds a BS in Speech Pathology from the University of Nevada, Reno. She was born in Arkansas and grew up living there and parts of the east coast before moving to Las Vegas, Nevada in 1997. She works as a freelance writer, and moonlights as the creative muse behind BrandyDanielle.com. She is currently writing for ComicBookDebate. Brandy resides in downtown Reno, Nevada.
More from this reviewer
PrevBehave
Alibi CreekNext