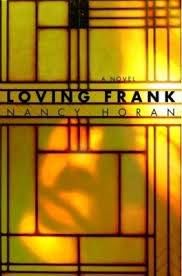 Edwin Cheney and his wife, Mamah Borthwick Cheney, greatly admired Frank Lloyd Wright’s Oak Park, Illinois designs, and so commissioned the architect to create something special for their family residence. During the project, Mamah and Frank fell in love, beginning an affair that lasted several years. At the time, their relationship was scandalous, creating chaos in their respective families and disrupting the lives of their children. Harsh headlines eventually drove the lovers to Europe, where Frank pursued his career from afar. After Mamah’s divorce (Frank’s wife never consented to divorce him), the couple returned to the United States. They settled in Wisconsin, where Frank designed and built the first Taliesin for his paramour.

Loving Frank is a fictional version that extrapolates from the known facts about Mamah’s and Frank’s relationship. While following actual events as accurately as possible, Nancy Horan imagines the scenes, the conversations, and the progress of the affair from Mamah’s perspective. Even before she met Frank, Mamah was uncomfortably married and searching for something more out of life. A suffragist at heart, and a fluent linguist, she was well read and broadly educated. While in Europe, she sought out other feminist thinkers, and became a disciple of a Swedish philosopher, Ellen Key, whose opinions were closely allied with her own. Out of their conversations came an agreement for Mamah to translate Ellen Key’s writings for American readers. So the course of Loving Frank is not just a narrative of Mamah’s romantic situation, but is also a reflection of her intellectual yearnings and educational growth.

The novel’s action parallels early twentieth-century conversations about the roles of women, both in Europe and in the United States. Mamah simultaneously is ahead of her time and of her time, which makes her dilemma all the more problematic. At every step she takes, she agonizes about what she is doing to her children, to her sister, to her husband, and to Frank’s professional reputation. Horan does an excellent job of getting inside Mamah’s thoughts and creating a genuinely bifurcated character who struggles with every decision.

For those readers who have read about Frank Lloyd Wright’s career, and/or studied his renown, the novel’s course and its climax will not be surprises. For those of us not familiar with his personal life, the denouement of Loving Frank comes as a stunning turn of events. I was so startled, in fact, that I wondered if the author had simply pushed her imagination too far. Checking, however, I found that Horan sensationalized nothing. The breath-taking ending is as accurate as possible.

I wish that the novel could have had a different conclusion. But we sometimes wish life could end differently, so I can’t condemn Horan for following the facts. At the same time, I can applaud her achievements in getting inside the intelligence and the imagination of a smart, frustrated, passionate woman who finds herself constricted by societal circumstances. I also applaud the way Horan holds all the other characters, even Frank Lloyd Wright, at arm’s length. We see the world of Loving Frank only as Mamah sees and understands and interprets it. And while we may acknowledge weaknesses and foibles that Mamah ignores, this only lends depth to our understanding of her circumstances. I kind of wish I hadn’t read the final thirty pages, but that is not the author’s fault. Otherwise I thoroughly admired Horan’s novelistic version of a complicated reality.    – Ann Ronald

Available as of January 2014 is Horan’s: Under the Wide and Starry Sky.

Ann Ronald is a retired English professor from the University of Nevada, Reno. Author of dozens of reviews, she’s also written a number of books about the American West. They include literary studies such as The New West of Edward Abby and Reader of the Purple Sage, cultural studies such as GhostWest and Oh, Give Me a Home, and nature writing such as Earthtones: A Nevada Album. Her latest is a work of fiction, Friendly Fallout 1953. Since retiring, she’s been reading vociferously, so “Bookin’ With Sunny” is giving her a wonderful opportunity to share thoughts about her favorite new discoveries.
More from this reviewer
PrevA Strong West Wind (A second look)
The End of Your Life Book ClubNext