Home » Reviews » What She Left 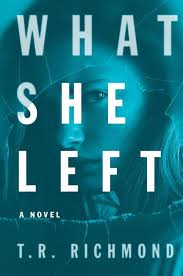 These characters are not likeable at all!!! Not a single man or woman in T. R. Richmond’s novel, What She Left, is someone you’d like to meet or get to know. But the book itself is a mini tour de force. So, despite my visceral reaction to the people who populate What She Left, I want to review it for “Bookin’ with Sunny.” It’s well worth checking out.

The premise is intriguing. Not long after she graduates from college, a young girl dies under suspicious circumstances. While the police rule Alice’s death a possible suicide, her friends and family are doubtful. One of her professors decides to investigate on his own. He chooses, in fact, to excavate Alice’s life, to conduct an anthropological exploration of the layers of her being. The result uncovers not only Alice’s complicated existence but also the strata of everyone who knew her. Mother, girl friends, acquaintances, lovers, everyone comes under the scrutiny of the professor, who himself is obsessed by his “scientific” project.

What makes Richmond’s novel so fascinating is the author’s creative methodology. Professor Cooke, the interrogator, uses every modern means to discover Alice’s secrets. What She Left swivels between text messages, diaries, letters, newspaper accounts, student essays, police reports, trysts, phone calls, memories, secret confrontations. Every page is different, as every character reveals a new glimpse into the past. Some scenes occur in the present, too, as old relationships are rekindled. Even blackmail surfaces, as do all the eccentricities and neuroses of each individual.

Alice’s personality takes on new dimensions as more and more secrets are revealed. Her voice is part of her story, too. Her diary, her posts, her letters never mailed add depth to Professor Cooke’s diggings. Meanwhile, he is embroiled in the action. His own secretive past plays a key role in his analysis of his materials. As a narrative voice, he turns out to be rather untrustworthy. What She Left, finally, exhumes Professor Cooke’s psychosis as well as Alice’s. But his project is a success when he publishes a book titled What She Left, a scholarly achievement that receives accolades and praise whereas his previous work had been mediocre at best. Ironically, his book is this book—insightful, provocative, and absolutely chilling.

Because there is nothing pleasant about What She Left, except for the quality of the writing and the originality of its premise, I can’t exactly recommend Richmond’s novel. For a reader with an analytic mind, however, one who thrives on psychological and/or literary puzzles, this story and its reconstruction can be captivating. Yet I must repeat my caveat—these people are not likeable at all!  – Ann Ronald

What She Left Behind is T. R. Richmond’s debut novel. 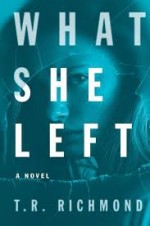 Ann Ronald is a retired English professor from the University of Nevada, Reno. Author of dozens of reviews, she’s also written a number of books about the American West. They include literary studies such as The New West of Edward Abby and Reader of the Purple Sage, cultural studies such as GhostWest and Oh, Give Me a Home, and nature writing such as Earthtones: A Nevada Album. Her latest is a work of fiction, Friendly Fallout 1953. Since retiring, she’s been reading vociferously, so “Bookin’ With Sunny” is giving her a wonderful opportunity to share thoughts about her favorite new discoveries.
More from this reviewer
PrevMy Kitchen Year – Ruth Reichl to the rescue
BehaveNext