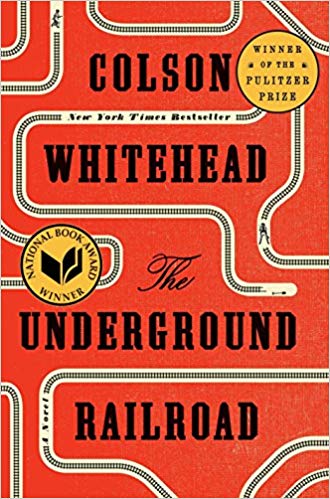 Is it true that Colson Whitehead’s Pulitzer Prize-winning novel The Underground Railroad “traces the terrible wounds of slavery,” as Michael Schaub wrote in his NPR review of the novel? That sentence, more than one-hundred-and-fifty years post-Civil War and Emancipation, seems lamely inadequate to me. I don’t believe this book is yet another novel to whet the appetite for White self-recrimination. To my way of thinking, Whitehead has written a roadmap, or travel guide, if you will, for all Black Americans of the twenty-first century.

I read The Underground Railroad back in 2016 but did not review it at that time. Neal Ferguson, however, did review it for BWS. His review is worth re-reading. I felt my take on the book was out of sync from what others had written. Now, after having re-read the novel twice, I’m willing to say what I think.

Let’s start from the story’s beginning: fifteen-year-old Cora and another slave, Caesar, escape from a Georgia plantation. As a White reader, I am not shocked by Cora’s inhuman treatment under American enslavement . But Whitehead’s literal under-the-ground railroad shocks me.

Although not new to Whitehead’s imagination, when the runaways, in amazement, ask who had built the station and the station master replies, “Who builds anything in this country?” I knew two things: 1) what the author has to say is probably going to remain underground, and 2) Whitehead is telling the truth.

Throughout the story, empowered by the Fugitive Slave Law, Cora is relentlessly pursued by the slave catcher Ridgeway. He follows her with bloodhound tenacity to the very end of the story.

Cora’s first stop and my second shock is South Carolina. Cora is renamed Bessie and welcomed by the people of South Carolina. Bessie takes care of a young boy. She feeds him, shops for the family, picks up the boy’s sister from school, and then waits for the mother to return home at six. The mother is busy combining outdoor activities with fund-raising for a new hospital. Huh?

None of this sounds real. Cora, as Bessie, lives in a dormitory for ex-slaves. The tallest building in this SC city, at twelve stories high, is historically impossible. We learn that the dormitory’s residents are subjects of a variety of medical tests, including research, sterilization, and blood testing. (A neat trick since blood testing first occurred in Germany in 1900). Thoughts of the Tuskegee syphilis experiments of 1932-1972, and of Henrietta Lacks then surface in my mind. In addition to all the medical goings-on, this city has a Museum of Natural Wonders in which Cora impersonates a cheerful slave on a slave ship exhibit, as well as a plantation slave working at a spinning wheel while occasionally tossing imaginary seeds at sawdust stuffed chickens. Already Southern whites are fed romantic versions of slavery’s ugly truths.

At about the time Cora realizes that South Carolina is not safe, the station master warns her that Ridgeway has arrived in South Carolina and is looking for her. This time, without Caesar, she takes the Underground again.

North Carolina, Cora’s next stop, is more overtly dangerous. Along the way to the station master’s home, she sees “corpses hung from trees as rotting ornaments. Some of them were naked, others partially clothed, the trousers black where their bowels emptied when their necks snapped.”  Something new? Or something to represent the hangings that would happen during the Jim Crow and Civil Rights years? Cora is hidden in an attic where she watches the weekly festivals of slave hangings and sometimes the hangings of those people who helped fugitive slaves. This time Ridgeway succeeds in capturing Cora and takes her away.

Cora, again in chains, is in Tennessee, still under the control of Ridgeway and another fellow, Homer, also black, but no longer enslaved, except to Ridgeway. Every night Homer writes down in a book exactly what has taken place that day. A Black American writer named Homer? Another sign of the author’s truth-telling? The Greek Homer’s epics, the Iliad and the Odyssey, are mythic journeys we still read today. And why? Because their tales of trial and tragedy are proof that humanity has not traveled as far as we’d like to think.

In Tennessee, while chained to Ridgeway’s wagon, Cora is rescued by three Blacks who take her to a farm community in Indiana, owned by the Valentines, a free Black family. Here, in relative safety, Blacks take part in a robust life of work, schooling, socializing, and group meetings. One of the speakers, a man called Mingo, believes blacks should move forward slowly, that not all are equipped to make it. This got me to thinking about Booker T. Washington and Justice Clarence Thomas. Another speaker, a Mr. Lander, speaks more forcefully, with echoes of Frederick Douglass and John Brown. Although the farm is in Indiana, a non-slave state, one night their surrounding white neighbors attack them, killing all the speakers, many of the residents, and burn the farm to the ground. Memories of Jim Crow, Medgar Evers, and MLK lead right up to our own twenty-first-century events.

Royal, one of Cora’s rescuers, is an agent for the Underground Railroad and periodically returns to the farm, bringing new families and fugitives. Before the story ends, Royal shows Cora an old, no longer used underground station. This is the station where Ridgeway’s life will end, and Cora’s will begin again. Cora feels about running, “as if in the world there were no places to escape to, only places to flee,” and considering today’s killings of unarmed blacks by some police, Cora’s thinking has a prophetic ring.

Whitehead writes a story ranging far beyond the cruelty of slavery. Unless we White Americans can get past resting on Lincoln’s laurels of Emancipation and begin to read and understand our true American history, including American slavery’s detritus, we will never be able to put a dent in our national racism, and American Blacks are screwed.   –   Sunny Solomon 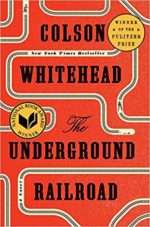 Sunny Solomon holds an MA in English/Creative Writing, San Francisco State University. She is a book reviewer for “The Clayton Pioneer” and her poetry and other writing has been published in literary journals, one chapbook, In the Company of Hope and the collection, Six Poets Sixty-six Poems. She was the happy manager of Bonanza Books, Clayton, CA and Clayton Books, Clayton, CA. She continues to moderate a thriving book club that survived the closure of the store from which it began. Sunny currently lives next to the Truckee in Reno, NV.
More from this reviewer
PrevThe Last Tourist
The Giver of Stars, Librarians, books, horses and the WPANext