Home » Reviews » The Giver of Stars, Librarians, books, horses and the WPA

The Giver of Stars, Librarians, books, horses and the WPA 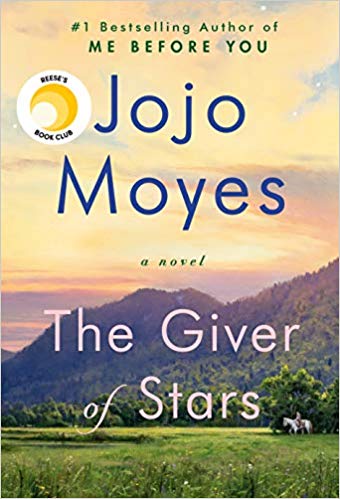 THE GIVER OF STARS, Packhorse librarians

If you love books, courageous women, libraries, and horses, you will find Jojo Moyes‘s The Giver of Stars about the Packhorse Librarians of Kentucky hard to put down. It begins with the Great Depression and President Roosevelt’s New Deal program originally called the Works Progress Administration in 1935, and later renamed The Work Projects Administration in 1939.

One of the most depressed states at that time was Kentucky, and it was Eleanor Roosevelt who came up with the idea of The Pack Horse Library Project, a program of book lending to the mountain people of Kentucky.

Moyes’s story begins in London, where an independent and feisty young woman, Alice, meets Bennett Van Cleve, the young son of an American mining magnate from Kentucky. The handsome young man proposes, and in Alice’s determination to escape the confines of her London family, she marries him and moves not to cosmopolitan New York or even Louisville, Kentucky. She ends up in the small mining town of Baileyville, surrounded by the Appalachia Mountains.

Alice is totally unprepared for the rural life of a Kentucky mining town in America’s most depressed State. And the folks in town are equally unprepared for Alice with her so very British ways. Instead of an exciting life of freedom, Alice finds herself trapped in her father-in-law’s large home and what soon becomes a loveless marriage.

It is not until she volunteers to be a part of The Pack Horse Librarian Project, that Alice begins to find a passion for a life of independence. Moyes spent time in Appalachia on horseback on the same trails as the women in her novel. Moyes also took the time to meet and talk with the folk who lived in the same small towns and far away mountain cabins as those in The Giver of Stars.  Moyes creates characters, women and men, to admire and cheer for, and others, to fear and despise.

At the novel’s heart is the power of books to move mountains, heal hearts, and culture. It takes place at a time when women had few choices, and in the mining town of Baileyville, under the powerful influence of Alice’s father-in-law, is a culture believing a woman’s only place is in the home. The five women most present in the story find their strength and influence as packhorse librarians.

The story is filled with heart, danger, surprising laughter, politics, and unexpected twists and turns. It should send many readers to Google to find out all they can about this remarkable project, which lasted beyond the years of the New Deal. The book’s title, The Giver of Stars, is aptly taken from a poem by Amy Lowell, and once read, you will understand why it was chosen.

The Giver of Stars

Hold your soul open for my welcoming.
Let the quiet of your spirit bathe me,
With its clear and rippled coolness,
That, loose-limbed and weary, I find rest,
Outstretched upon your peace, as on a bed of ivory.

Let the flickering flame of your soul play all about me,
That into my limbs may come the keenness of fire,
The life and joy of tongues of flame,
And, going out from you, tightly strung and in tune,
I may rouse the blear-eyed world,
And pour into it the beauty which you have begotten.

The Giver of Stars says as much about the grateful Kentuckians, adults, and children, whose lives were as touched by the books, as by the women who delivered them on horseback. What a wonderful book to begin a new year of reading.  –  Sunny Solomon

Also available by Moyes: The Girl You Left Behind; The Last Letter from Your Lover; One Plus One; Windfallen; Sheltering Rain; The Horse Dancer; The Ship of Brides; The Peacock Emporium; Silver Bay; Night Music; Foreign Fruit; Honeymoon in Paris; Me Before You. 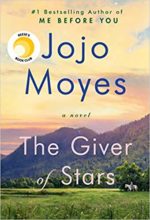 Sunny Solomon holds an MA in English/Creative Writing, San Francisco State University. She is a book reviewer for “The Clayton Pioneer” and her poetry and other writing has been published in literary journals, one chapbook, In the Company of Hope and the collection, Six Poets Sixty-six Poems. She was the happy manager of Bonanza Books, Clayton, CA and Clayton Books, Clayton, CA. She continues to moderate a thriving book club that survived the closure of the store from which it began. Sunny currently lives next to the Truckee in Reno, NV.
More from this reviewer
PrevThe Underground Railroad
Big Lies in a Small TownNext