Home » Reviews » Me Before You 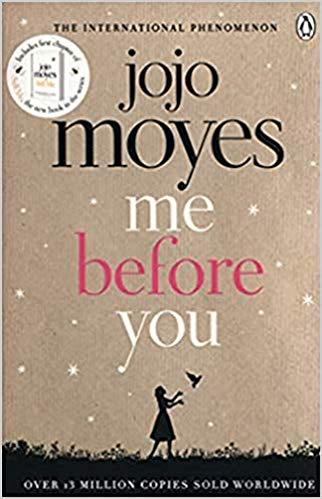 British novelist Jojo Moyes has written more than a romantic novel with Me Before You. The story takes place in a small English village whose inhabitants are experiencing the same economic and work-related difficulties facing so many middle-class families. This particular village is a bit singular in that it has an ancient castle which, as a tourist attraction, is its economic mainstay. Much of the village’s future is wedded to its past, none more so than Moyes’s protagonist, Louise Clark.

Louise stands out not because she is so spectacular, but because she is so remarkably ordinary. In her mid-twenties, she still lives with her parents and helps her family in their support of her older and brainy sister, who left for college only to return home pregnant and unmarried. When Louise’s boss of six years sells The Buttered Bun, a diner located at the foot of the castle, she finds herself like so many others, in line at the unemployment center and being offered jobs for which she is almost always ill-suited. Things become more desperate when her father admits that his job may be in jeopardy. It is only then that Louise accepts a position as a care assistant, working for the Traynor family whose wealth is closely tied to the nearby castle. The job and the Traynor family will change her life forever.

Will Traynor is a handsome, thirtyish financier who also resides with his parents, but that is about the only thing he and Louise have in common. Will is quadriplegic, injured when struck down as he ran to catch a cab in London. At the time Mrs. Traynor hires Louise, Will has been living an angry, painful, wheelchair-bound life for two years. Louise, with no real experience as a caretaker, is surprised to get the offer based solely on her previous boss’s recommendation, describing her as “a warm, chatty, and life-enhancing presence.” Louise is further confounded to find that the job will only last six months.

Why the job is to last only six months is a mystery slowly and surreptitiously revealed well into that time period. Gradually, by fits and starts, Will and Louise begin a relationship that the reader roots for, despite its obvious limitations. Theirs is a relationship that teeter-totters to an unlikely and thoroughly unexpected balance and rhythm. Me Before You is not some sappy love story. Everything that Louise learns from the privileged world of Will Traynor takes its toll on her own life each night when she leaves the palatial estate and returns to her home, her parents, her sister, nephew, and aging grandfather

As Louise becomes more open and honest with Will, her shallow relationship with her boyfriend is compromised. Can such honesty, which affects both patient and caretaker, lead to something that will last longer than the contracted six months?

Louise’s understanding of what makes life worth living is challenged and tested the closer she gets to the end of the six months. As the six-month deadline approaches, the reader will grapple with the same complex moral and physical issues that Louise and the Traynor family must deal with. Me Before You is a small treasure. It is also a quiet treasure, and its value is that it will move the thoughtful reader well beyond any tears shed.     – Sunny Solomon

Also available by Moyes: The Girl You Left Behind; The Last Letter from Your Lover; One Plus One; Windfallen; Sheltering Rain; The Horse Dancer; The Ship of Brides; The Peacock Emporium; Silver Bay; Night Music; Foreign Fruit; Honeymoon in Paris. 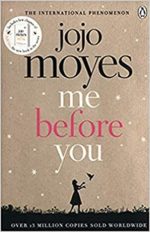 Sunny Solomon holds an MA in English/Creative Writing, San Francisco State University. She is a book reviewer for “The Clayton Pioneer” and her poetry and other writing has been published in literary journals, one chapbook, In the Company of Hope and the collection, Six Poets Sixty-six Poems. She was the happy manager of Bonanza Books, Clayton, CA and Clayton Books, Clayton, CA. She continues to moderate a thriving book club that survived the closure of the store from which it began. Sunny currently lives next to the Truckee in Reno, NV.
More from this reviewer
PrevLetters from Skye
Acquainted with the ColdNext