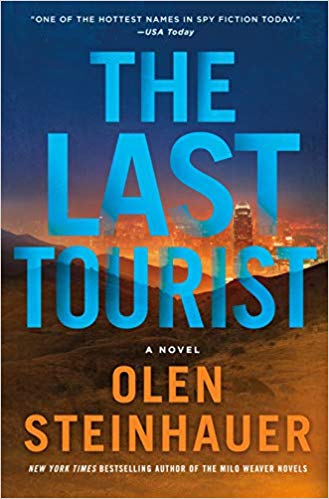 Olen Steinhauer’s novel, The Last Tourist, is the fourth Steinhauer thriller featuring Milo Weaver. Like its predecessors, this one keeps the reader on edge until the very last page, mainly because it is almost impossible to separate the truths from the lies, the good guys from the bad. Since Milo Weaver was an honorable man in The Tourist, The Nearest Exit, and An American Spy, I assumed his morals remained incorruptible in The Last Tourist. It’s hard to tell at the outset, however, because this narrative opened with a Langley meeting that questioned Milo’s loyalty. A few pages later, Steinhauer confirmed that his novel would twist and turn on matters of truth. “2016,” he writes, “brought out the worst in people. Black was white, and patriotism was treachery. Some had the gift of coloring the truth just enough to make it look like a lie, and to carefully prune a lie until it passed the smell test and became accepted truth, not just to the intended audience, but also eventually to the liar himself.” Thus Steinhauer firmly grounds The Last Tourist in a present-day Twittery conundrum of spycraft and statesmanship and political intrigue.

In a novel layered with spies and their handlers, past and present, working from an array of different angles and divided loyalties, it is almost impossible to discern what and who to trust. That precisely is Steinhauer’s point. In the past, a mysterious group called The Tourists employed Milo and his colleagues, but most of The Tourists have been murdered in previous Milo novels. Now he seems to be working with an assortment of Librarians, who work for The Library, an agency embedded in the United Nations and apparently working to diffuse the powerful instincts of major political powers. Or are they?

Confused yet? Again, that is precisely Steinhauer’s point. Each of The Last Tourist chapters turns fact into fiction into fact into fiction, while each new character can be interpreted as trustworthy or not, depending on the paragraph and the page. “That was the problem with diplomats and politicians,” one of those characters observes. “Nothing they said could be taken at face value.” And the agencies and nation-states they belong to are equally specious. Promised “not just knowledge but power, the ability to shape human history,” each group has “been seduced completely” into Steinhauer’s fictive world. The result is a fast-moving catapult into scenes where nobody trusts anybody and where the reader is misled more often than he or she is told the truth.

I think there are two ways to read such a roller-coaster thriller. The first is to read slowly, to ponder the paragraphs and chapters, to savor the connections and disconnections, to piece the puzzle carefully together. Ultimately, The Last Tourist does hold together; ultimately, all the lies and diversions make a coherent whole. I, on the other hand, chose a totally different way to read Steinhauer’s captivating book. I turned the pages quickly, letting myself get caught up in the speed that dictates the story’s movements. I didn’t even try to figure out what and who to trust. I didn’t try to memorize who was who or even who was alive after being declared dead, and vice versa. Furthermore, I didn’t attempt to nail down what agency belonged to what country or what cartel was in charge of what illicit scheme or what fringe obsession was leading to what unmitigated disaster. I just let myself get pulled into the fray. Thus, I voluntarily surrendered to exactly the pattern Steinhauer meant to portray. Twenty-first-century geopolitics are irrationally complex and it truly is almost impossible to isolate certainties from, well, from whatever. The Last Tourist, I believe, majestically mirrors the Twitter mindset. I recommend succumbing, in this fictional instance, to the seduction.  –  Ann Ronald

The Last Tourist will be available in March 2020.

Also available by Olen Steinhauer: The Tourist; The Nearest Exi; An American Spy; The Middleman; All the Old Knives; The Cairo Affair; The Bridge of Sighs; The Confession; 36 Yalta Boulevard; Liberation Movements; Victory Square 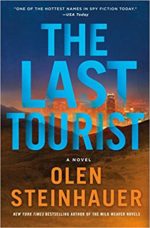 Ann Ronald is a retired English professor from the University of Nevada, Reno. Author of dozens of reviews, she’s also written a number of books about the American West. They include literary studies such as The New West of Edward Abby and Reader of the Purple Sage, cultural studies such as GhostWest and Oh, Give Me a Home, and nature writing such as Earthtones: A Nevada Album. Her latest is a work of fiction, Friendly Fallout 1953. Since retiring, she’s been reading vociferously, so “Bookin’ With Sunny” is giving her a wonderful opportunity to share thoughts about her favorite new discoveries.
More from this reviewer
PrevNomadland, Surviving America in the Twenty-First Century
The Underground RailroadNext