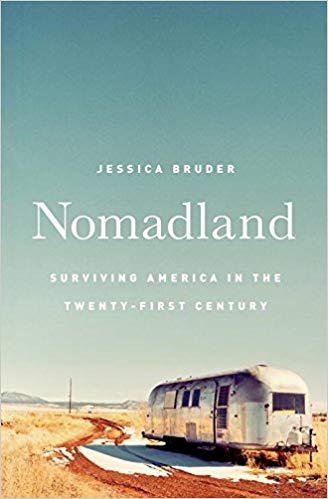 An eye-opening book of investigative journalism, Nomadland explores the terrain traveled by those who are houseless—not homeless, houseless—men and women who live year-round in one kind of vehicle or another. Some live this way by choice, but Jessica Bruder, the author of Nomadland, focuses on those who have been forced by economic circumstances to pursue migrant lives on the road. Bruder spent three years traveling among groups of American nomads, talking with them, sharing their campsites, listening to their dreams. The result is a sympathetic retelling of their nomadic stories, as well as a realistic look at how these travelers cope with “Surviving America in the Twenty-First Century.”

Bruder chooses Linda May as the touchstone of the book. All her life, Linda has worked hard at a variety of minimum wage jobs.  Now in her sixties, she drives an ancient, once-totaled Jeep Grand Cherokee Laredo that tows her house, her home, “a tiny, pale yellow trailer she calls ‘the Squeeze Inn.’” Nomadland begins by driving alongside Linda as she heads toward a campground host job in the San Bernardino National Forest. From May until September, she will be “equal parts janitor, cashier, groundskeeper, security guard, and welcoming committee.” The pay? $9.35 an hour.

Once that season ends, Linda heads for another job with Camperforce, this time in an Amazon warehouse that needs temporary workers for the fall holiday crush of orders. Ten-hour shifts, on her feet, holding a numbing tendonitis-inducing scanner, $11.25 an hour. After that, she travels to Quartzsite in the Arizona desert, where thousands of similarly situated people gather each winter. There Linda and her fellow nomads form temporary enclaves and lasting friendships, family of a sort that bonds with warmth and spontaneity. [In fact, Bruder finally bought her own van (nicknamed ‘Halen’) so she could participate alongside the nomad community at the annual “Rubber Tramp Rendezvous.”]

Everywhere she goes, Linda makes friends. Joining her, Bruder makes friends, too, enabling the journalist to interview an intriguing collection of mostly-retired men and women who are struggling to make ends meet. They hold seminars and workshops in Quartzsite, teaching each other how to outfit their cars and vans, how to get along with minimal belongings in a country where property signals success. Even when they disperse, the rendezvous-ers still support one another, keeping in touch the modern way with websites and internet groups, Facebook pages and e-mail. They meet up in new places, too, trying out a different campground job that someone recommends, or a more distant Amazon warehouse where the work revolves around robots, or the sugar beet season, which attracts nomadic workers every fall. [Once again, Bruder takes on the life of a nomad by sloughing sugar beets in North Dakota, then trying a brief, exhausting Amazon stint, though she guiltily recognizes that she can quit any time while Linda and her co-workers can’t afford such luxury.]

Nomadland isn’t at all a narrative of hardship, however. Rather, it is a collection of personal stories about people making decent lives for themselves, making a connective tissue of lasting friendships, making their vehicles their homes. I was struck by the upbeat ambiance that Bruder conveys. Complainers seem to be ostracized at the encampments and even at the brutal temporary jobs. Linda May sets the tone. A woman dogged by hard-luck circumstances who always lands on her feet, she always has a cheery smile and looks forward to a happy future no matter what obstacles might get in her way. She, and so many of her friends, although houseless, are happily at home in Nomadland. Jessica Bruder has written a fine tribute to their tenacity and perseverance.   –  Ann Ronald 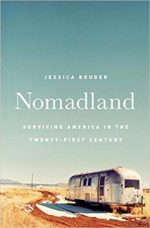 Ann Ronald is a retired English professor from the University of Nevada, Reno. Author of dozens of reviews, she’s also written a number of books about the American West. They include literary studies such as The New West of Edward Abby and Reader of the Purple Sage, cultural studies such as GhostWest and Oh, Give Me a Home, and nature writing such as Earthtones: A Nevada Album. Her latest is a work of fiction, Friendly Fallout 1953. Since retiring, she’s been reading vociferously, so “Bookin’ With Sunny” is giving her a wonderful opportunity to share thoughts about her favorite new discoveries.
More from this reviewer
PrevReturn of the Sea Otter
The Last TouristNext