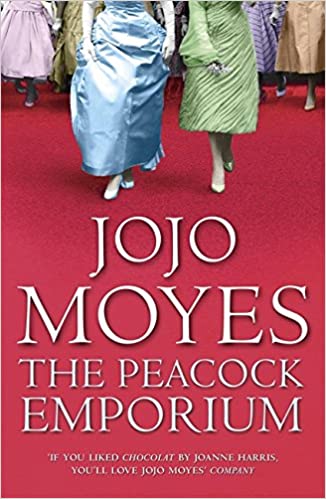 Sometimes, when reading a novel, I try to envision a single word that captures the totality of its fictional world. For Jojo Moyes’ The Peacock Emporium, that word was easy to imagine. Refractions. The Peacock Emporium is essentially a series of refractions, beams of light bending and bouncing off individual characters and successive generations, each new ray layering additional depth to Moyes’ vision of Suzanna Peacock and her family.

Suzanna, in her mid-thirties, again and again, is trying to “find” herself. She and her husband Neil have moved to the small municipality near ancestral holdings where her parents still live. She misses London, where she fled more than a decade earlier, and she detests the provinciality of Dere Hampton, “a town more in love with its history than its future.” In contrast, Suzanna longs for a future, any sort of future, in order to escape her cloistered family and her checkered history. Since she has always loved to shop, she decides to open a tiny emporium, selling espresso coffee and odds and ends of antique jewelry, furniture, decorations, and clothes.

At first, the refractions are obvious. Suzanna looks very like her mother, Athene, who died in childbirth and whom she never knew. An old portrait reveals the startling similarities, while snippets of Athene’s stories from the past echo Suzanne’s own behavior in the present. Two devil-may-care women, careless of other people and desperate to find some modicum of personal happiness, drawn to adventure and chaos the way moths are drawn to light. As such a creature, Suzanna’s plans for an emporium seem odd. How can she possibly succeed as a thriving shopkeeper in a Suffolk village called Dere Hampton?

With the help of other people is the answer. Some are family, like her loyal, self-sacrificing stepmother; others are townspeople with equally eccentric shops nearby. One person of particular note is Jessie, a sprightly young woman who insists that Suzanna needs a helper to assist with the espresso machine and to coddle the customers. Another set of significant people are the customers themselves. Their lives, too, reflect scenes from Suzanna’s past and future.

An abundance of those refractions involve motherhood and childbirth. Neil, more than anything, wants a family. Suzanna deflects and delays. That’s one reason why she buries herself in the emporium, because a newborn career is a way of postponing Neil’s urgency. Parenting is important for many of the other characters, too. Suzanna’s father and stepmother constantly question their relationships with their eccentric daughter; Jessie has a young daughter she adores; several other characters struggle with parenting, too. Toward the end of the novel, those narrative echoes rapidly increase, as do the refractions and reflections.

Moyes actually ponders the nature of all relationships, of love and marriage, as well as parent and child. I can’t be more specific because I don’t want to give away any of the plot, but suffice to say that male/female interactions and couplings are important refractions and reflections, too. And all of this is done with great subtlety. As you read this quite intriguing novel, you’ll be surprised at how many narrative beams are bouncing on the pages, at how frequently the scenes anecdotally re-image one another. You’ll like The Peacock Emporium, especially the final chapters where the imagery rebounds. Moyes effectively draws all the light rays together, finally brightening both Suzanna’s future and the reconstructed memories of her past.  – Ann Ronald

Also available by Jojo Moyes: The Girl You Left Behind; The Last Letter from Your Lover; One Plus One; Windfallen; Sheltering Rain; The Horse Dancer; The Ship of Brides; The Peacock Emporium; Silver Bay; Night Music; Foreign Fruit; Honeymoon in Paris; Me Before You. 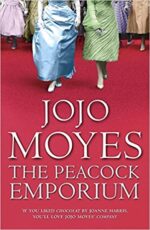 Ann Ronald is a retired English professor from the University of Nevada, Reno. Author of dozens of reviews, she’s also written a number of books about the American West. They include literary studies such as The New West of Edward Abby and Reader of the Purple Sage, cultural studies such as GhostWest and Oh, Give Me a Home, and nature writing such as Earthtones: A Nevada Album. Her latest is a work of fiction, Friendly Fallout 1953. Since retiring, she’s been reading vociferously, so “Bookin’ With Sunny” is giving her a wonderful opportunity to share thoughts about her favorite new discoveries.
More from this reviewer
PrevOverground Railroad
The Mystery of Mrs. ChristieNext