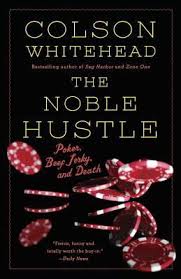 Pulitzer Prize Winner (“The Underground Railroad”) Colson Whitehead has done it again, written a book unlike any other that I’ve read. “The Noble Hustle,” a be-all and end-all of serious poker playing, caught my eye not only because I so trust his writing, but mostly because after living in Nevada for more than six years I have not dropped as much as a quarter in a slot machine. I do not gamble. It’s bad enough that I obsessively love addictive online games, but were I to step up to a one-armed bandit or even a roulette table, I know I’d ultimately leave the casino with nothing left in my wallet.

I also consider poker a guy game. Whitehead suggests otherwise. I am, however, a vicariously curious non-gambler. Why would anybody risk so much real money on so much pure luck? “The Noble Hustle” explains everything. From the moment Whitehead accepts a magazine assignment staking him $10,000 to play in the 2011 World Series of Poker, beginning with “six weeks training camp” in Atlantic City, until he is a player at the televised WSOP in Las Vegas, he tells us everything we’ve ever wanted to know about poker. Every movie-going American has a poker memory, card sharks playing the cowpokes, riverboat hustlers owning the poker table. Today, however, poker is more than a gambling game, it’s a sport, a very expensive sport, and its name is Texas Hold ‘em.

Whitehead’s chance of a lifetime comes at a rough time in his life, recently separated from his wife and daughter, he is both reminiscing and risking the odds of his new singlehood as he sharpens his poker skills with the goal of being worthy of his journalistic endeavor. Whitehead not only reads everything he can get his hands on, but he also passes that information on to us.  I tried my hardest to pay attention but had to go back time and again to familiarize myself with the Small and Big Blind, the Flop, the Turn, not to mention the River, or being Rivered. Eventually, our undaunted hero gets himself a poker coach, a woman who has played in previous WSOP tournaments. Women, in fact, are very much a part of the poker world.

What makes Whitehead’s book so charmingly addictive is the range of writing surrounding the main topic, the WSOP. When did he first start playing poker? In the middle of such personal chaos, what would make him accept such an assignment? Did his college poker playing days help? Fashion at the poker tables and the nicknames people choose for themselves are laugh-out-loud grist for the humor mill.

No spoilers here. Did he make it past day one? Did he really eat a lot of beef jerky? And did he buy as many tourist trinkets as intimated? Is poker really noble?

As the author says, “I learned a lot of things during my long, bizarre trip. About myself and the ways of the world.” I did, too, “The Noble Hustle” is, hands-down, one sure bet.   –  Sunny Solomon 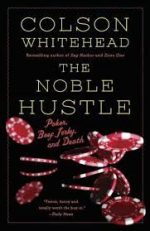 Sunny Solomon holds an MA in English/Creative Writing, San Francisco State University. She is a book reviewer for “The Clayton Pioneer” and her poetry and other writing has been published in literary journals, one chapbook, In the Company of Hope and the collection, Six Poets Sixty-six Poems. She was the happy manager of Bonanza Books, Clayton, CA and Clayton Books, Clayton, CA. She continues to moderate a thriving book club that survived the closure of the store from which it began. Sunny currently lives next to the Truckee in Reno, NV.
More from this reviewer
PrevWhat Happened, Miss Simone?
Incendiary ArtNext