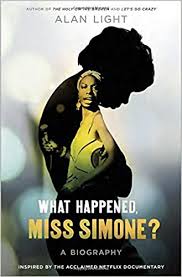 Alan Light’s biography of Nina Simone rhetorically asks, What Happened, Miss Simone? The answer turns out to be a complicated one. First of all, it is difficult to characterize the vocalist’s artistry, for her talent ranged over a broad spectrum of musical gifts. Trained as a classical pianist, Eunice Waymon nearly won scholarships to such highly-regarded institutions as Juilliard and the Curtis School. When those prizes didn’t materialize, she began playing in nightclubs to earn some cash. The night of her first gig, her new boss told her she had to sing, too. Thus Eunice Waymon became Nina Simone, a musical virtuoso, a master of soul, of the blues, of jazz, of African rhythms, of American poetic sounds. Add in a dogmatic overlay of civil rights advocacy, and you have a leading musical force of the mid-twentieth century.

Second, and crucially, Nina Simone’s life was not an easy one. What did happen? Her career was a mélange of highs and lows, of Carnegie Hall applause and of tax evasion guilt, of friendships with most major performers of her time and of abject loneliness, of happiness and violence, of love and despair. From a twenty-first-century vantage point, it’s easy to diagnose her traumas as bi-polar, manic performances see-sawing with acute depressions, but in her lifetime friends and family were at a loss to provide stability. They hovered like moths to a flame, unwilling to abandon the star but unable to save her from herself.

Reading Alan Light’s biography of Nina Simone was a unique experience for me. Because I like history and because I was trained in nineteenth-century literature, most of my biographical forays have centered on people whose words were accessible only from the printed page. In contrast, Simone’s biography came alive with sounds, the voices of her peers talking about her, her many personal interviews and on-stage revelations, and, most importantly, the incredible power of her music. I read What Happened, Miss Simone? with my electronic notepad at hand. Whenever Light mentioned one of her songs, included its lyrics, explained its artistic or political relevance, praised its accomplished form, I would listen to Nina Simone’s performance of that very song. Sometimes I listened more than once, for she regarded every performance as something new. When the timbre of her voice deepened, as her repertoire broadened and as her stage presence matured, her technique changed, too. The sounds of a 1974 performance differ greatly from those of the same song recorded in 1958.

For me, What Happened, Miss Simone? contained revelations and reminiscences. Because I was coming of age at the same time in America, the chapters about her civil rights involvement were especially thought-provoking. Her contacts read like a who’s who of political activism, reminding me of news headlines and campus protests long submerged. In fact, her agonies about the many tragic events of the 1960s were painful to revisit. Equally excruciating was her pattern of self-destruction, a downward spiral that might occasionally catapult her into new musical heights but more often would drop her into the depths. Her music came to the rescue, however. Listening to her, I savored my own youth, but even more, I appreciated her extraordinary genius. What Happened, Miss Simone? (a title taken from a documentary of the same name depicting Nina Simone’s career) has a twofold answer. On the one hand, what happened to her personally was tragic. On the other, her musical achievement was prodigious. Alan Light successfully brings those contrary trajectories together.

If you choose to read What Happened, Miss Simone? I hope you’ll listen to her music, too.   –  Ann Ronald

Also available by Alan Light: The Holy Or the Broken; The Skills to Pay the Bills; Let’s Go Crazy. 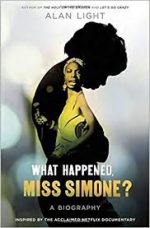 Ann Ronald is a retired English professor from the University of Nevada, Reno. Author of dozens of reviews, she’s also written a number of books about the American West. They include literary studies such as The New West of Edward Abby and Reader of the Purple Sage, cultural studies such as GhostWest and Oh, Give Me a Home, and nature writing such as Earthtones: A Nevada Album. Her latest is a work of fiction, Friendly Fallout 1953. Since retiring, she’s been reading vociferously, so “Bookin’ With Sunny” is giving her a wonderful opportunity to share thoughts about her favorite new discoveries.
More from this reviewer
PrevThe Shadow Land
The Noble HustleNext