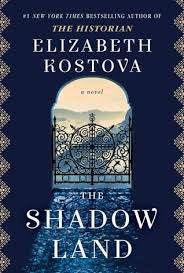 If “Bookin’ with Sunny” were to give five stars to the best novels we review, Elizabeth Kostova’s The Shadow Land would deserve at least that many. Not only is the plot an intriguing skein of disparate threads that all connect somehow, but her book also reveals the author’s mastery of the art of narration. The Shadow Land has everything a discriminating reader might want—multi-layered characters, a design that builds to a stunning climax, and artistic touches gracefully added throughout.

The story begins in a straightforward manner. Alexandra Boyd has come from America to a teaching position in Bulgaria. Before she can even find her lodgings, however, a luggage mix-up occurs. She discovers a black canvas bag inadvertently cached with her own belongings. Hoping to learn who owns the bag, she opens it. Inside, she finds a carved wooden box engraved with the name Stoyan Lazarov, a box filled with his funeral ashes. For the next several hundred pages, as Alexandra searches for the owner of the bag, she will unearth the history of Stoyan Lazarov—a highly-regarded Bulgarian violinist, a mid-twentieth-century political prisoner, a loving husband and father.

The Shadow Land thus moves back and forth between Alexandra’s present hunt and Lazarov’s life story. Aided by her sympathetic taxi driver, Alexandra tries to track down Lazarov’s widow and son, who were standing nearby when the luggage mix-up occurred. As she searches for the pair (who have mysteriously disappeared), she encounters many men and women who knew Lazarov and his family. Here is where Kostova demonstrates her extraordinary talent. When each informant tells a portion of the Lazarov story, the narrative voice echoes the persona of the speaker. A next-door neighbor sounds unlike an elderly sister sounds unlike the artist who carved the funereal box.

Mid-way through the novel, a partial manuscript appears. Then Alexandra is able to hear Lazarov’s own voice as he recounts his prison camp experiences. There, he maintained his sanity by pretending to raise his son, year by year, and by replaying violin solos in his imagination. His favorite composer?  Vivaldi. So Lazarov also pictures the red priest scoring his Venetian music, note by note. Again, back and forth The Shadow Land moves, first following Alexandra’s multi-voiced investigations, then joining Lazarov’s laborious life, then moving back to the present and to Alexandra’s current difficulties.

It seems the Bulgarian political oppression that has plagued Lazarov and his family for years is now pursuing Alexandra and her taxi driver accomplice, who may also be part of the intrigue. While that sentence might sound confusing, Elizabeth Kostova is not. She writes The Shadow Land in logical blocks of thought and action. The reader cannot be sure of a character’s trustworthiness, but the clarity of the plot trajectory is never in doubt. Lazarov’s wife and son have gone into hiding; Alexandra is under surveillance. The closer she gets to finding the owners of the ornate box, the more trouble she encounters. Trouble ensues for many of the men and women she questions, too. Some disappear almost immediately; others, die violently.

One more artistic ingredient adds strength to this pulsating novel. The author’s pictorial imagination dominates every paragraph. Kostova describes scenery with precision, with an attention to detail that grounds her narrative in reality. As I read, I could feel the prisoners’ pain, could watch them individually fade into oblivion. I could also enjoy ancient Bulgarian towns nestled on steep hillsides, or I could smell the rust and decay of an aging modern city. The Shadow Land brings each setting to life, just as it brings Lazarov’s history (and the trials of modern Bulgaria) to life as well. A five-star novel, for sure.   –  Ann Ronald 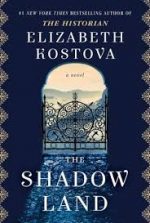 Ann Ronald is a retired English professor from the University of Nevada, Reno. Author of dozens of reviews, she’s also written a number of books about the American West. They include literary studies such as The New West of Edward Abby and Reader of the Purple Sage, cultural studies such as GhostWest and Oh, Give Me a Home, and nature writing such as Earthtones: A Nevada Album. Her latest is a work of fiction, Friendly Fallout 1953. Since retiring, she’s been reading vociferously, so “Bookin’ With Sunny” is giving her a wonderful opportunity to share thoughts about her favorite new discoveries.
More from this reviewer
PrevHidden Figures
What Happened, Miss Simone?Next