Home » Reviews » The Bones of Paris

The Bones of Paris 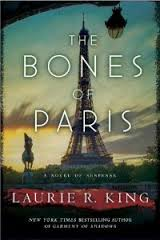 From Laurie R. King, one of the S.F. Bay Area’s favorite mystery writers, comes another exciting stand-alone mystery. King has recreated the Paris of the late 1920s, including the overflow of American ex-patriots writing, dancing, singing, drinking, painting, photographing and loving their way through the city’s heart.

And the bones of The Bones of Paris? They are real, but not the infamous bones of those encrypted or buried in mass graves after one ancient plague or another. The bones of King’s novel are much more recent and the mystery of whose bones they are, and how they got that clean, falls to the sleuthing prowess of not only a Parisian detective in charge of missing persons, but a hot-tempered American private eye hired by the uncle of a young lady recently gone missing.

This is a crowded tale of French history, misbehaving Americans, all things modern, Brits still recovering from the horrors of the War to End All Wars, an aristocratic French count, damaged and eccentric, and two detectives: Doucet, from the Préfecture De Police, and Stuyvesant, the private eye originally from the States. Oh, and the women? Pip Crosby, the missing niece; Nancy Bergen, Pip’s roommate; and Sarah Grey, Stuyvesant’s lost love and current fiancée of – no, that would be a spoiler.

If you’ve never read about all those artistic types who left America to hone their creative talents in the City of Lights, this is your chance. King peoples her novel with familiar American names – Hemingway, the sure-fisted writer, Man Ray, the iconic photographer, Fitzgerald of Gatsby fame, Stein, who still can’t be explained, and bookstore/salon muse Beach. There are enough others that the uninitiated reader will wonder if it was really true: were they all there? Improbable, but true, that so many of America’s greatest creative minds, in the early part of the twentieth century, treated Paris like a revolving door is a fact. King’s treatment of them is more imaginative than strictly factual, but it works to enliven the mystery.

Initially, Stuyvesant believes he is looking for a young, fun-seeking American who has gone missing, but as her trail begins to fade, he is forced to face the fact he is looking for a body. The missing American is eventually included in a bizarre list of missing persons, French and otherwise. Stuyvesant and Doucet begin to cross each other’s paths with increasing regularity, becoming dangerously confrontational on both personal and professional levels when the appearance of beautiful bones, artistically presented, lead both men to a scary little artist who is connected to the aristocratic count, who not only keeps company with a famous American photographer, but is Sarah Grey’s employer. Time is of the essence as the ancient and modern converge with a vengeance; almost nothing is left to chance and every second is important.

The twists and turns increase to the point that the last quarter of the book is read in one great gulp; not a particularly gastronomical feast, but completely satisfying to a Laurie R. King fan.

The Bones of Paris will be available Sept. 2013. Also available by King: Garment of Shadows; The Beekeeper’s Assistance; A Letter of Mary; The God of the Hive; A Monstrous Regiment of Women; The Moor; O Jerusalem; Justice Hall; The Game; Locked Rooms; The Language of Bees; Pirate King; Mrs. Hudson’s Case;

Sunny Solomon holds an MA in English/Creative Writing, San Francisco State University. She is a book reviewer for “The Clayton Pioneer” and her poetry and other writing has been published in literary journals, one chapbook, In the Company of Hope and the collection, Six Poets Sixty-six Poems. She was the happy manager of Bonanza Books, Clayton, CA and Clayton Books, Clayton, CA. She continues to moderate a thriving book club that survived the closure of the store from which it began. Sunny currently lives next to the Truckee in Reno, NV.
More from this reviewer
PrevPilgrim’s Wilderness
18 In AmericaNext