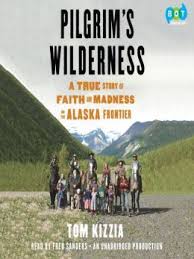 Pilgrim’s Wilderness: A True Story of Faith and Madness on the Alaska Frontier

As a reporter for the Anchorage Daily News, Tom Kizzia covered the 2003 confrontation between the Pilgrim family and the National Park Service. The Pilgrims had settled on a 410- acre inholding in the Wrangell-St. Elias National Park not far from McCarthy, Alaska, and had bulldozed an illegal road to gain easier access to their property. At the time, the Pilgrims were touted as exemplars of devout Christian living and as models for land rights crusaders. The confrontation was a tense one, and highly publicized. It petered out only when the government blocked all direct access to “Hillbilly Heaven” (as the Pilgrims called their isolated home). Winter conditions and lack of food finally drove the Pilgrims away.

While describing the Pilgrim odyssey for the Anchorage newspaper, Kizzia did a lot of additional research and interviewed a number of the participants and eye witnesses to the anti-government confrontation. When, a few years later, the Pilgrims once again made news headlines, Kizzia conducted more interviews and pursued his research even further. The result is Pilgrim’s Wilderness, subtitled A True Story of Faith and Madness on the Alaska Frontier, a nonfiction account of a father’s fanatical dreams and his unfortunate family’s destiny.

Kizzia’s book actually covers three facets of Bobby Hale, aka Sunstar, aka Papa Pilgrim’s life. Woven into the narrative of his Alaska homesteading and his increasing hostility to authority are two other stories. One involves the past, revealing secrets about Bobby Hale’s advantaged Texas youth and tracing his evolution into the rural hippie known as Sunstar. The other describes the dynamics of family life inside the microcosmic existence of Papa Pilgrim, his wife (“Country Rose”), and their fifteen children. Ostensibly devout and devoted to the Bible and its teachings, the iron-fisted patriarch appears to be messianic and mesmerizing. The truth is something quite different—tyrannical, sociopathic, violent, and downright evil.

Pilgrim’s Wilderness is well worth reading on several different levels. First of all, Kizzia writes a clear-headed examination of land use issues, particularly those involving residents angered and conflicted by well-meaning political attempts to save a pristine environment from local degradation. Kizzia presents both sides cogently and fairly. He also raises tangential issues, such as the rights of newcomers versus the rights of old-timers. Almost immediately after settling on “Hillbilly Heaven,” the Pilgrims set out to defy authority. Some residents of nearby McCarthy applaud their belligerence, while others see them as manipulative outsiders. Indeed, the Pilgrims are able to buy the inholding with money from the Alaska Permanent Fund even though they’ve only lived in Alaska for a few years. They take advantage of the system even as they rail against its strictures.

Kizzia’s book also probes a lifestyle foreign to most of us. Ostensibly evangelical, Papa Pilgrim preaches like a pied piper and easily attracts enthusiasts to his causes. From the outside looking in, his family appears healthy and happy. Especially appealing is the music they make together, a kind of folksy homespun blue grass where everyone plays a different instrument and their voices harmonize perfectly. The truth of their existence is otherwise, and I found especially interesting the steps each family member must take to extricate him or herself from patriarchal control.

Pilgrim’s Wilderness is an excellent example of straightforward nonfiction that is as gripping as any novel might be. For the most part, Kizzia reports objectively, but occasionally he inserts himself as an actor/participant. This works well. The result is a powerful revelation about religion, politics, and family dysfunction, seen first-hand.

Also available from Tom Kizzia: The Wake of the Unseen Object: Travels through Alaska’s Native Landscapes.

Ann Ronald is a retired English professor from the University of Nevada, Reno. Author of dozens of reviews, she’s also written a number of books about the American West. They include literary studies such as The New West of Edward Abby and Reader of the Purple Sage, cultural studies such as GhostWest and Oh, Give Me a Home, and nature writing such as Earthtones: A Nevada Album. Her latest is a work of fiction, Friendly Fallout 1953. Since retiring, she’s been reading vociferously, so “Bookin’ With Sunny” is giving her a wonderful opportunity to share thoughts about her favorite new discoveries.
More from this reviewer
PrevThe Burgess Boys
The Bones of ParisNext