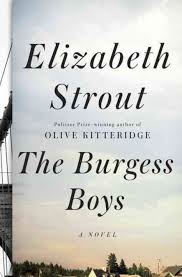 The Burgess Boys belongs to a literary genre that I might facetiously describe as “familial angst.” Written for mildly neurotic women readers and populated by slightly more neurotic characters, a familial angst novel delivers a story about a family—or families—with problems. Those problems include sibling disputes, parental pathologies, children run amok, and generational dysfunction in general. On the plus side, however, is the fact that when you read a familial angst novel, and immerse yourself in its characters’ lives, you generally feel better about your own less-than-perfect family circumstances. When the novel is a good one, the whole reading experience is vicariously satisfying and quite cathartic. The Burgess Boys, written by Elizabeth Strout, is a very good novel indeed.

The Burgess family is comprised of three siblings—brother Jim, a successful corporate lawyer with grown children and an apparently happy marriage; brother Bob, four years younger, a Legal Aid attorney, divorced and childless; and Bob’s twin sister Susan, divorced, with a troubled teen-aged son in serious legal trouble. The brothers, who both fled Maine years ago, live and work in New York City, while Susan has remained in their home town, Shirley Falls. When Zack, Susan’s son, commits a hate crime, the brothers rush to his defense. And, as expected in a familial angst novel, as soon as the three Burgess siblings gather together in Shirley Falls, the role-playing and the myths of their childhood recur, and all the old wounds and youthful grievances resurface.

Strout has a talent for exposing frailties. Subtle, never heavy-handed, she expertly exposes foibles and dissects her characters. She does this not only with the Burgesses but with all the attendant characters, too, sometimes in a single telling paragraph. As you read, you feel like the novel is populated with old friends and neighborhood acquaintances. You know these people—the superficial wife of Jim’s law firm’s senior partner, Bob’s ex-wife who vacillates in her affections, troubled Zach alone in his bedroom with only his computer for company. As the family dynamics unfold, you get to know Jim and Bob and Susan even more intimately. You watch interactions that have repeated themselves for more than forty years, you learn the truth about old family secrets, and you uncover the Burgesses’ growing consciousness of how destructive the old patterns have been. Familiar angst; then catharsis: the ideal formula.

Strout has added another dimension that I thought smartly enhanced The Burgess Boys. Shirley Falls has attracted a burgeoning Somali population. Zach’s behavior and the community’s reactions enable Strout to explore contemporary issues about immigration and racial prejudice. She does so with grace and subtlety. As her novel proceeds, she occasionally delves into the hearts and minds of the Somalis, considering their own isolation from their pasts and their own longings to maintain their native identities. I thought that one of the most momentous scenes in the novel occurred when a Somali man, Abdikarim Ahmed, looked into Zach’s eyes and saw replicated the anguished soul of his own dead son, forever out of reach.

That unspoken interaction is a bonus, as is the contemporary expression of race and refugees. Most of The Burgess Boys centers on the Burgess familial angst, the late psychological maturation of all three siblings, and their personal interactions with each other and with the world around them. I started this review by saying I was being facetious, but in truth I liked Strout’s novel immensely. I even liked the three main characters, though more often than not I wanted to shake them!                           – Ann Ronald

Also available by Strout: Olive Kitteridge; Amy and Isabelle; Abide with Me.

Ann Ronald is a retired English professor from the University of Nevada, Reno. Author of dozens of reviews, she’s also written a number of books about the American West. They include literary studies such as The New West of Edward Abby and Reader of the Purple Sage, cultural studies such as GhostWest and Oh, Give Me a Home, and nature writing such as Earthtones: A Nevada Album. Her latest is a work of fiction, Friendly Fallout 1953. Since retiring, she’s been reading vociferously, so “Bookin’ With Sunny” is giving her a wonderful opportunity to share thoughts about her favorite new discoveries.
More from this reviewer
PrevTahoe Chase
Pilgrim’s WildernessNext