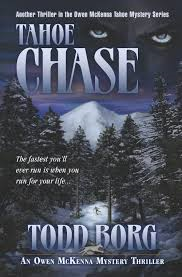 Reviewers for “Bookin’ with Sunny” are enthusiastic Todd Borg fans. Whenever he writes a new Lake Tahoe mystery, we line up; first to gain access to the novel, and second to see who gets to write the review. I always lose out to Sunny. Because publishers send her the books, she gets first dibs on anything she wants to read. But this time I successfully wrestled the reviewing rights away. Even though I had to wait until after Sunny finished reading Tahoe Chase, I now get to brag on-line about how much I enjoyed the latest Owen McKenna episode.

This is Todd Borg’s eleventh McKenna mystery. Each is set somewhere near Lake Tahoe and the lake’s immediate surroundings. From the isolated back country to the gaudy casino lights, from Incline Village east to Reno, from Kingsbury Grade down to the Carson Valley, in blizzards and in heat waves, McKenna travels a landscape I know extremely well. Borg gets the physical terrain exactly right. He gets the ambiance right, too, the sense of a resort community filled with skiers and snow boarders and wannabes in winter, crowded with boaters and hikers and scenery gawkers in summer, home to extreme wealth, abject poverty, and every manner of human situation in between.

Like Borg’s other tales, Tahoe Chase begins with someone asking Owen McKenna to solve a problem. In this case, the puzzle is elusive—attempted murder or just an unfortunate accident? Owen isn’t sure, but agrees to investigate the situation. Then more and more deaths occur, each corpse somehow connected to the original victim and each, like the first, appearing as an accident. With the help of his buddy, a Douglas County sheriff, and the support of his girlfriend, Street, Owen begins to peel back the layers of evil. Of course he is successful, but not until the conclusion of a climactic chase scene characteristic of all Todd Borg mysteries.

This thrilling denouement takes place in the Desolation Wilderness, where I’ve hiked countless times but where I’ve never ventured during a December blizzard. So I really enjoyed reading about particular trails and lakes and peaks (frigidly blurred with wind and snow) that I’ve enjoyed on warm summer days. Borg’s novels are a treat for any reader, but they’re especially enjoyable for those of us who have personal memories of the places he describes. Even though I’ve never confronted a killer in the wilderness, I still can relate to Borg’s particular sense of place.

Other elements of Tahoe Chase are familiar and enjoyable, too. As always, I smiled at the antics of his largeness, a Harlequin Great Dane named Spot who accompanies Owen almost everywhere. I also relished meeting new characters. Every Borg novel introduces new people in new difficulties. Some never reappear, while others recur from mystery to mystery. Joe Rorvik, an old-time ski champion now in his nineties, and Simone Bonnaire, a battered woman befriended by Owen and Street, are two Tahoe Chase characters I’d like to know better. How their lives fit together, and how their individual stories play out, are at the heart of this latest McKenna mystery. Like all Borg characterizations, they’re drawn crisply and with sound insight. I hope they come back in future books.

Borg publishes at least one Owen McKenna novel a year. They’re perfect to read at the beach in summer or while curled before a blazing fireplace mid-winter. They’re neither frothy nor superficial, however, because they’re well plotted and well written. Tahoe Chase, and its McKenna predecessors, fits the mold. Exciting, explosive, thoughtful, sometimes funny, always just plain fun. (Now if I can just get Thriller Press to send me number twelve instead of Sunny!)                      – Ann Ronald

Ann Ronald is a retired English professor from the University of Nevada, Reno. Author of dozens of reviews, she’s also written a number of books about the American West. They include literary studies such as The New West of Edward Abby and Reader of the Purple Sage, cultural studies such as GhostWest and Oh, Give Me a Home, and nature writing such as Earthtones: A Nevada Album. Her latest is a work of fiction, Friendly Fallout 1953. Since retiring, she’s been reading vociferously, so “Bookin’ With Sunny” is giving her a wonderful opportunity to share thoughts about her favorite new discoveries.
More from this reviewer
PrevChasing the Devil’s Tail – Jass – Rampart Streety
The Burgess BoysNext