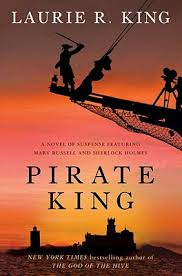 Pirate King is Laurie R. King’s eleventh Sherlock Holmes novel, starring Mary Russell. My Bantam trade paperback copy of the book contains a special treat—the reprinting of a short story that was King’s original introduction of the duo. In that story, Beekeeping for Beginners, a crotchety, depressed, newly-retired Holmes narrates his first meeting with young Mary, who totally captivates his imagination with her energy and her intellect. Soon he is her friend, her mentor, and her protector. Throughout King’s subsequent novels, their relationship grows and develops. By the time it reaches Pirate King, the two not only are married but are actively engaged in the pursuit of all manner of scoundrels and villains.

Mary is the narrator of Pirate King. The novel is a rollicking take-off on Gilbert and Sullivan’s The Pirates of Penzance, complete with exotic locales, lusty exchanges, and tongue-in-cheek humor. The difference in tone between Beekeeping for Beginners and this latest King book is striking. Where the short story is told with sonorous irony, the novel rings with light-hearted lampooning. As I recall, each of the books in between bears its own special tone, too. By reading the whole series, we are treated to an entire range of satire. And mayhem, of course.

Pirate King is the story of a film company and its founder, Randolph Fflytte, who makes silent movies in the post-World War I era. This ‘Fflytte of Fancy,’ he hopes, will be his latest masterpiece. Loosely following the script of Pirates of Penzance, and then extrapolating wildly, Fflytte is filming a film company making a film. He hires a troop of young women actresses, and takes them to Lisbon where he intends to employ a comparable set of pirate actors. There, his imagination goes wild. He buys a pirate ship, and the entire company sets sail for northern Africa. I won’t give away any more of this ridiculous plot. Suffice to say it is not only absolutely absurd, but absolutely hilarious; rather like Gilbert and Sullivan.

Mary goes along as the company’s secretary. Something is amiss about this Fflytte and his crew, and Mary’s job is to find out why each of his films ends up in a criminal disaster that parallels the movie’s action. An earlier film about Hannibal? Smuggled elephant ivory. Another film about Prohibition? Illicit white lightning. This film about pirates? Perhaps actual piracy on the high seas? When the story begins, Mary has no clue about what the crime will be, but she and her detective husband (who ensconces himself aboard ship, too) are convinced that some horrendous new ‘Fflytte of Fancy’ will occur. It does.

A USA Today quote on the cover of Pirate King calls it “an engaging romp guaranteed to please . . . perfectly written in the style of Sir Arthur Conan Doyle.” I agree that the book is ‘an engaging romp,’ but I give Laurie R. King more credit than mere imitation of Doyle. She has her own engaging style, perfectly attuned to the particular action of any particular novel, and keenly honed from one Mary Russell and Sherlock Holmes adventure to another. That Pirate King is so much more amusing than her other books, which sometimes are very dark and depressing, is testimony to her talents.

Also available by Laurie R. King: Garment of Shadows; The Beekeeper’s Apprentice; A Grave Talent; The God of the Hive; O Jerusalem; A Letter of Mary; The Art of Detection; A Monstrous Regiment of Women; Justice Hall; The Moor; The Language of Bees; Locked Rooms; With Child; Beekeeping for Beginners; To Play the Fool; Night Work; Folly; Touchstone; A Darker Place; Keeping Watch; The Game; Laurie R. King’s Sherlock Holmes. 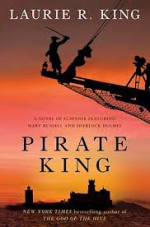 Ann Ronald is a retired English professor from the University of Nevada, Reno. Author of dozens of reviews, she’s also written a number of books about the American West. They include literary studies such as The New West of Edward Abby and Reader of the Purple Sage, cultural studies such as GhostWest and Oh, Give Me a Home, and nature writing such as Earthtones: A Nevada Album. Her latest is a work of fiction, Friendly Fallout 1953. Since retiring, she’s been reading vociferously, so “Bookin’ With Sunny” is giving her a wonderful opportunity to share thoughts about her favorite new discoveries.
More from this reviewer
PrevAnother Place and Time
The Round HouseNext