Another Place and Time 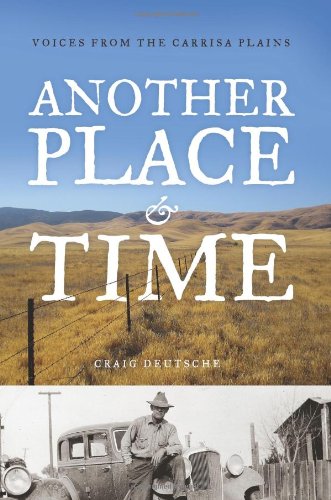 Another Place & Time: Voices from the Carrisa Plains

Too many voices from our American past have been lost, especially those of men and women who led decent but unspectacular lives. Without leaving much of a mark on history, they vanish into the past. So every once in a while, we should pause and remember their contributions to the American dream, their struggles, their goals, and their humanity. Craig Deutsche has taken time to preserve a representation of these voices from a lonesome California valley called the Carrisa Plains. East of San Luis Obispo and west of Bakersfield, the area is now designated on maps as the Corrizo Plain National Monument. For much of the twentieth century, however, it was home to farmers, ranchers, and sheepherders—an array of families who represent ways of life now almost extinguished.

Craig Deutsche discovered the Carrisa Plains almost by accident, when he volunteered to do some service work at the newly named Monument. The more time he spent there, and the more people he met, the more intrigued he became. Jackie Czapla, who works at the Visitor Center, had tried to preserve some of the valley’s past, but time was escaping her. Conferring, the two decided to track down and record, as soon as possible, as many remembrances as they could find. The result? Another Place & Time: Voices from the Carrisa Plains.

Unlike academic oral histories, this one unapologetically is filtered through Craig’s consciousness. Not only is Another Place and Time a repository of the valley’s memories, but it is also the story of Craig’s quest to meet as many relevant people as possible, to convince them to talk with him and with Jackie, and to personally understand his attraction to the valley and its history. The result is a readable narrative that intersperses Carrisa Plains voices with Craig’s own. For all the participants in this project, the experience was one of coming of age.

The book is organized thematically, rather than chronologically. A single family may reappear in different chapters, under the rubric of ranchers, for example, and then under children or as part of the portraits of matriarchs. The result is not confusion, however. Instead, one finishes reading Another Place & Time with a strong sense of how lives bonded in an isolated place where finances were always precarious. I was especially struck by the ways the people helped each other out—at harvest time, when someone was ill or hurt in an accident, house raising, or after a violent storm. Craig mentions, too, that the interviewees never used the word “hardship.” Rather, they just faced whatever came their ways, and made the best of their circumstances.

Anyone who loves American history and American stories will thoroughly enjoy Another Place & Time. Not only are the voices authentic, but the details of daily life echo many other narratives of the same time. Not long ago I reviewed Dorothy Wickenden’s Nothing Daunted for “Bookin’ with Sunny,” and I heard those Colorado experiences resonating throughout this tale of California. Making a living in a rural setting is hard work, but most families look to the future with optimism and do the best they can. Craig and Jackie deserve our thanks for preserving these memories of the Carrisa Plains. Because of its somewhat narrow focus, their book had to be self-published. Personally, I think it deserves a wide distribution and a much wider audience. Another Place & Time has a lot to say.

(I was asked to review Another Place & Time for the Sierra Club’s Desert Report. When I read the book, I realized that readers of “Bookin’ with Sunny” would enjoy hearing about its contents, too. So I’ve just done what I don’t believe I’ve ever done before—reviewed the same book for two different venues. .Maybe that’s fitting for a book about a place that’s spelled two different ways—Carrisa Plains and Corrizo Plain.)                              -Ann Ronald 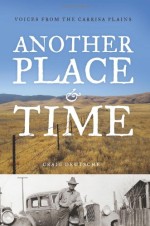 Ann Ronald is a retired English professor from the University of Nevada, Reno. Author of dozens of reviews, she’s also written a number of books about the American West. They include literary studies such as The New West of Edward Abby and Reader of the Purple Sage, cultural studies such as GhostWest and Oh, Give Me a Home, and nature writing such as Earthtones: A Nevada Album. Her latest is a work of fiction, Friendly Fallout 1953. Since retiring, she’s been reading vociferously, so “Bookin’ With Sunny” is giving her a wonderful opportunity to share thoughts about her favorite new discoveries.
More from this reviewer
PrevBad Indians
Pirate KingNext