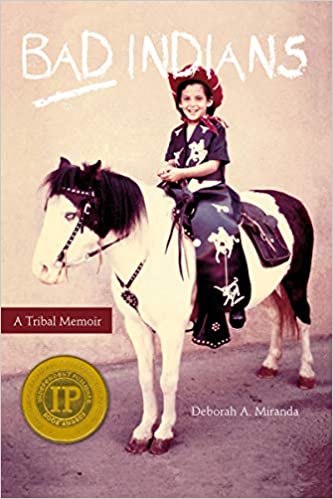 It took Deborah Miranda, in her search for her own California Indian roots, to go much further than “inside and out.” Miranda went under. She dug deeper than what a mission gift shop offers its thousands of visitors. She sought primary sources and followed every unpleasant clue as to the real history of the California Missions and the Indian cultures that were very nearly decimated.

Miranda was born in California, but by the time she was in the fourth grade, she was living in the State of Washington and her California Indian heritage was of no interest to that state’s Board of Education. The State of Washington had its own Indian history to deal with. Although the author’s mother was not Indian, her father was of Chumash and Esselen heritage. Unless you have a special interest in California Indians, you’ve probably never heard of those tribes. Bad Indians does more than introduce the reader to the hidden history of California Indians, it reaffirms the inherent destructiveness of colonialism.

Bad Indians is Deborah Miranda’s own fourth grade California Mission unit, written, with eyes wide open, as an adult. It is also memoir – not just her own, but through extensive oral histories, those of her grandparents, great grandparents and the cultures in which they lived. The Spanish colonization of Mexico, and then its spilling over into what would someday become the State of California, is a story of ignorance, greed, and the quest for power over people and land. There was nothing benign about Spain’s Franciscan missionaries’ treatment of the indigenous inhabitants of California. The book contains quotes from original diaries of the priests (photographs of these diary pages are also included). Their descriptions of how they controlled the Indians are both incredibly shocking and sad. Miranda has used words from Father Junipero Serra himself as the springboard to her own poetic retelling.

To Miranda’s credit, Bad Indians is a great deal more than a litany of the sins of the Franciscan missionaries and Spain, whose orders they were following, more even than a litany of legal abuses (including murder) carried out against the California Indians by the U.S. Government and State of California. At the heart of this intensely personal search for her own identity is the power of language, both written and spoken. The author not only uncovers, with the help of family, other like-minded people and dedicated historians, the lost stories, but lays bare the lies that have kept these stories so well buried for hundreds of years.

How is the author able to take us, Indian and non-Indian reader alike, through a door into a history we have never been taught, and to do it without guilt-shaming the non-Indian and enraging the Indian? As awful as the facts are, it is the shape of Bad Indians, its chapters, its graphs, photographs, songs, poetry, and language of hope that keep the reader from closing the book and saying, “Enough.”

“Enough” is not a word valued by readers who love history. It is certainly not a word in Deborah Miranda’s vocabulary. The stories she has uncovered have brought to life cultures long-assumed lost. The poems she has written give voice to a language thought dead. The truths contained in her book are difficult to absorb, but necessary to share. Let us lay to rest the old adage that “The only good Indian is a dead Indian” and give thanks that Deborah Miranda is one of the “Bad Indians” living to tell her story.    — Sunny Solomon

Also avaialable by Deborah A. Miranda: The Zen of  La Llorona; Indian Cartography; Your Time for Peace has Come; Deer: Poems. 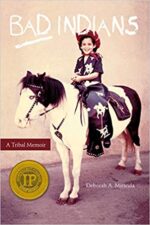 Sunny Solomon holds an MA in English/Creative Writing, San Francisco State University. She is a book reviewer for “The Clayton Pioneer” and her poetry and other writing has been published in literary journals, one chapbook, In the Company of Hope and the collection, Six Poets Sixty-six Poems. She was the happy manager of Bonanza Books, Clayton, CA and Clayton Books, Clayton, CA. She continues to moderate a thriving book club that survived the closure of the store from which it began. Sunny currently lives next to the Truckee in Reno, NV.
More from this reviewer
PrevClaude & Camille
Another Place and TimeNext