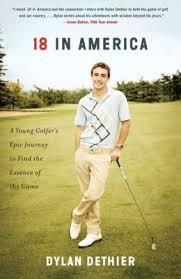 18 In America: A Young Golfer’s Epic Journey to Find the Essence of the Game

Standing on the first tee, with the sun just coming over the horizon and marsh birds cackling in the rushes, I tee up a brand new ball, take a practice swing, stare down the fairway, and pause, just for a moment. A moment of infinite perfectibility, as I’ve always described the instant before the first golf swing on the first hole, that split second when anything and everything is possible. As Dylan Dethier explains in his charming narrative, 18 In America, “golf is a game built on what’s possible. Everything is going to get better the next shot, the next hole, the next round.”

Attuned to that premise, he follows the possibilities for a life-changing year. Rather than go to college alongside most of his friends, Dethier decides to travel somewhat randomly around the country, playing golf in every one of the lower 48. He begins in New York, heads west along the northernmost tier of states, meanders down the Pacific coast from Washington to California, crisscrosses back from west to east, circles the south, and finally ends where he began in New England. The trip takes the better part of a year, a sojourn both whimsical and purposeful.

While Dethier’s narrative focuses on golf, it’s more subtly the story of a young man coming of age. He travels alone, often sleeping in his car. He hasn’t much money, so he skimps on meals and cadges free golf whenever he can. At first, he plays shoddy municipal courses. His early itinerary is eclectic, and often takes him through weather that makes golf problematic. He perseveres. As he travels, he writes a blog that slowly captures attention. Fans begin e-mailing him, inviting him to visit and play. The PGA is intrigued. Before long, Dethier is playing top-notch courses and interacting with a whole different breed of golfer, the kind of man he himself might turn into once he’s graduated from college, married, and pursued a lucrative career. That leads him to muse about the lives of all his playing partners, who run the gamut from retired old-timers on miniscule pensions to wealthy go-getter entrepreneurs.

He doesn’t play golf with any woman in the course of 18 In American, an omission I regretted. Because I golf almost every week with women and with men, I see the differences in their games. Men bet more than women, men delight in long drives, men tease, men concede putts; women never concede putts. Of a certain age, we play a different dimension of golf—short, straight shots and a heavy reliance on our chipping game. Par is good, but nowadays bogie isn’t bad. I wish Dethier had stopped by Reno on his travels—my friends and I could have shown him another facet of the game we love.

I can’t quarrel with the author, however, for writing the book that best suited an eighteen-year-old’s experiences. Both the tone and the content of 18 In America are exactly right. Dethier sees himself realistically and honestly, and his interactions with the men he meets are always delightful. Non-golfers will find his words a pleasure, but golfers will especially enjoy Dylan Dethier’s book. I plan to pass it around to my golfing buddies, for sure.                                  – Ann Ronald

Ann Ronald is a retired English professor from the University of Nevada, Reno. Author of dozens of reviews, she’s also written a number of books about the American West. They include literary studies such as The New West of Edward Abby and Reader of the Purple Sage, cultural studies such as GhostWest and Oh, Give Me a Home, and nature writing such as Earthtones: A Nevada Album. Her latest is a work of fiction, Friendly Fallout 1953. Since retiring, she’s been reading vociferously, so “Bookin’ With Sunny” is giving her a wonderful opportunity to share thoughts about her favorite new discoveries.
More from this reviewer
PrevThe Bones of Paris
Blood & BeautyNext