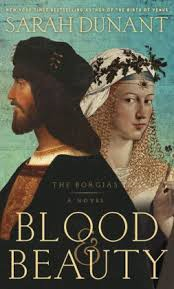 Blood & Beauty retells the story of the Borgia family’s rise to power at the height of the Italian Renaissance. The novel begins on August 11, 1492, with the declaration: “WE HAVE A POPE!” The ultra-ambitious Rodrigo Borgia becomes the new Pope Alexander VI, and immediately sets in motion a series of moves to solidify his control over Rome and its immediate surroundings and to ensure a ruling Borgia dynasty throughout Italy for generations to come. His eldest son, Cesare, is to become a Cardinal, with a distant plan to become Pope when his father dies. Rodrigo’s middle and youngest sons are to marry well, accumulating substantial dowries and acquiring military might. His daughter, Lucrezia, will marry appropriately too, several times, as the plot unfolds. Four children, often at odds with each other, all work in tandem with their father to take over as much land and wealth and prestige as possible.

The family machinations fill page after page, as they plot and pillage and murder their way to power and riches. The characters are extraordinary. Pope Alexander VI comfortably displays his mistresses and his illegitimate offspring, unconcerned about either celibacy or reputation. He only wants to gain favors for his precious children. Cesare is equally aggressive and not nearly as charming. A handsome man, a womanizer, a fearless soldier, and absolutely amoral in both his personal and professional conduct, Cesare takes whatever he wants whenever he wants it. His path to success is quite littered with corpses, and he rarely looks back.

My favorite Borgia, however, is Lucrezia, who innocently enters the action just before her fourteenth birthday. Sarah Dunant masterfully develops that youthful naiveté into a keen awareness and an invincible aura of self-determination. The novel closely follows Lucrezia’s travels and travails from innocence to experience, beginning with her first marriage when she is but a girl, continuing with a second marriage that is destroyed by her brother’s Machiavellian appetite for control, and ending as her third marriage begins. In the course of just five years, she becomes the woman whose reputation still surrounds her name.

By the time Lucrezia is nineteen, her self-possession actually “unnerves” her malevolent sibling: “the loving little sister who used to run into his arms, admiration shining out of her eyes, has gone. In her place sits a calm but distant woman who seems to be standing beside herself, watching how she behaves.” In a telling scene that precedes Lucrezia’s agreement to marry a third time, Cesare waits for “some kind of conciliation, a hint of forgiveness (for instigating the murder of her second husband). It does not come. It would seem that whatever sweetness there is in her, she is more a Borgia than she might choose to be.” That process of developing Lucrezia from child to mature Borgia is the emotional and psychological heart of Blood & Beauty. She indeed inherits her father’s personal charisma and his acquisitive soul.

Dunant, in a “Historical Epilogue,” explains what is actually known and what is mere speculation about this notorious family. Blood & Beauty considers those facts and extrapolates with care. Like all gifted historical novelists, Sarah Dunant wisely abjures idle speculation. She does muse, however, about writing a sequel. I hope so. Lucrezia’s third marriage promises to be as politically precarious as the first two, Cesare seems at times almost out of control, and the family patriarch is rapidly aging—all fodder for further pages of prose. Personally, I can’t wait to read more Dunant interpretations of the Borgia strengths and foibles.               – Ann Ronald

Also available by Sara Dunant: The Birth of Venus; In the Company of the Courtesean; Sacred Hearts; Mapping the Edge; Birth Marks; Flatlands; Under My Skin; Snowstorms in a Hot Climate; Transgressions.

Ann Ronald is a retired English professor from the University of Nevada, Reno. Author of dozens of reviews, she’s also written a number of books about the American West. They include literary studies such as The New West of Edward Abby and Reader of the Purple Sage, cultural studies such as GhostWest and Oh, Give Me a Home, and nature writing such as Earthtones: A Nevada Album. Her latest is a work of fiction, Friendly Fallout 1953. Since retiring, she’s been reading vociferously, so “Bookin’ With Sunny” is giving her a wonderful opportunity to share thoughts about her favorite new discoveries.
More from this reviewer
Prev18 In America
Flight BehaviorNext