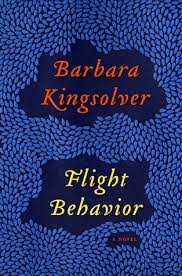 Barbara Kingsolver is at her best when she views a particular setting and its inhabitants through the eyes of a keenly perceptive female character. Writing Flight Behavior, Kingsolver is at her very, very best. The novel takes place in rural Appalachia, where Dellarobia Turnbow, with her husband and their two children, are eking out a living on a farm controlled by her in-laws. The first chapter of Flight Behavior portrays Dellarobia’s precarious situation and her instincts to flee the scene. In effect, the novel begins with “flight behavior.”

Butterflies, millions of them, stop her in her tracks. Monarchs, who have wintered in Mexico for untold generations, suddenly appear on the Turnbow property. “Every tree on the far mountainside was covered with trembling flame . . . The fire was alive, and incomprehensibly immense, an unbounded, uncountable congregation of flame-colored insects.” What follows is a multi-layered tale of science, global warming, and habitat degradation. Pinned against these environmental issues are Dellarobia’s personal attempts to make sense of her own constricted environment. When scientists come to study the misguided monarchs, Dellarobia’s micro-existence irrevocably evolves.

A major strength of Flight Behavior is the way in which Kingsolver blends serious global dilemmas with the more personal problems of her central character. The butterflies have fled their normal wintering grounds because of climate change and mudslides. Their sudden appearance in Tennessee stirs the locals to rethink their own interactions with their land. Logging in Tennessee will undoubtedly create the same problems as did clear-cutting in Mexico. A season of warm temperatures and heavy rains leads the residents of Feathertown to reconsider their plans. They also begin trying to figure out ways to cash in on the butterflies’ presence. Might their isolated corner of Appalachia become a tourist destination? At the same time these issues are being discussed, Dellarobia is feeling more and more out of sync with her family. Even as she connects with the scientists, her personal isolation increases.

To express the complicated interactions of the novel, Kingsolver uses metaphor. The obvious figure of speech is the recurrence of “flight behavior.” Both the butterflies and Dellarobia are stretching their wings, hunkering down, once more stretching their wings. But Kingsolver’s figurative language is much more complicated than that. It encompasses almost every facet of Dellarobia’s life, expressing her relationship with her husband, her love for her children, her awkward interactions with her mother-in-law, her joie d’vivre when gossiping with her best friend, her conversations with the scientists, her wandering eye, even her oversight of the Turnbow sheep and the two dogs who work the ewes and lambs.

The cover of my copy of Flight Behavior quotes the New York Times Book Review, saying the novel is “both intimate and enormous.” That phrase perfectly describes Kingsolver’s accomplishment, the serious interplay between the environment and the self. I like smart books, ones that make me think about issues broader than the story line. I also like astute characters, men and women whose thoughts and actions mesh together in convincing ways. Flight Behavior includes both—provocative things to think about and shrewd, believable actors on a larger stage. Flight Behavior is a long book, and every page is worth reading.                                   – Ann Ronald

Also available by Barbara Kingsolver: Pigs in Heaven; Bean Trees; Animal Dreams; The Poisonwood Bible; The Lacuna; Prodigal Summer; Small Wonder; Homeland and Other Stories; High Tide in Tucson; Holding the Line: Women in the Great Arizona Mine Strike of 1983.

Ann Ronald is a retired English professor from the University of Nevada, Reno. Author of dozens of reviews, she’s also written a number of books about the American West. They include literary studies such as The New West of Edward Abby and Reader of the Purple Sage, cultural studies such as GhostWest and Oh, Give Me a Home, and nature writing such as Earthtones: A Nevada Album. Her latest is a work of fiction, Friendly Fallout 1953. Since retiring, she’s been reading vociferously, so “Bookin’ With Sunny” is giving her a wonderful opportunity to share thoughts about her favorite new discoveries.
More from this reviewer
PrevBlood & Beauty
TransAtlanticNext