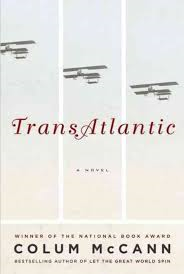 Irish writer Colum McCann, now living and teaching in New York City, has created something magical in his latest novel, TransAtlantic. At the novel’s end, the elderly great-granddaughter of the primary female character eavesdrops as a young mother reads to her children. The old woman thinks to herself, There isn’t a story in the world that isn’t in part, at least, addressed to the past.

It is no small feat for this gifted author to take us both backward and forward in time, from the first transatlantic flight from Newfoundland to Ireland in 1919, and then back even farther, to the ship-bound transatlantic journey of Frederick Douglass to begin his 1845 abolitionist speaking tour in Ireland. Among the people he meets is a servant girl who will herself travel across the Atlantic to reach the shores of New York before Douglass returns home. In 1998 the Atlantic is crossed again, this time by jet, bringing U.S. Senator George Mitchell to Belfast in a last-ditch effort to help bring peace to that troubled land. Then we step back once more to the story of the servant girl who made her way from New York to Missouri, then east again and finally into Canada, into Newfoundland; then again, across the Atlantic until the story ends in the very cottage described in the author’s brief prologue before the telling begins.

The magic of TransAtlantic is the seamlessness with which McCann reminds us, through his characters and their actions, of the human need for identity in both person and place, and the peace required for both to flourish. The story begins not only with the first transatlantic flight, but with a letter entrusted to Arthur Brown, one of the two heroic aviators. The letter, written by a female journalist of Newfoundland and delivered by her daughter, is addressed to a family in Ireland. Does the letter reach its destination? Before we ever find out, McCann takes us back to the Ireland of 1846, a land much impoverished but willing to support the American anti-slavery movement. Frederick Douglass, the now world-famous African-American orator, activist and fugitive slave — a man who lives as a free American only as long as he can continue to elude those who by law still have the right to claim him and return him to slavery — is marketing not only the abolitionist movement, but his newly published autobiography. Douglass struggles to make sense of the poverty endured by the Irish, a people not tethered to slavery. He was aware that the essence of proper intelligence was the embrace of contradiction.

TransAtlantic is an historical novel, but at its core are a series of women whose involvement in this history appears to be peripheral until the reader realizes it is the women who have taken, time and again, their own steps toward freedom for themselves and those they love. As intricate and disparate as each story is, under McCann’s straightforward writing, they come together almost tenderly. Douglass witnesses the farewell between Isabel and her Irish maid: Isabel leaned forward and embraced the maid, whispered something in her ear. Lily nodded and pulled the shawl tight down over her head. What thoughts trembled there? What fierceness had brought her here? Again it is a woman, this time in 1998, as Senator George Mitchell’s wife sees him off to his task in Belfast, who sees most clearly what can lie ahead: What she worries about most of all is that he will become the flesh at the end of an assassin’s bullet. When the story returns to Lily, the Irish servant girl, she is nursing the legion of wounded arriving by the wagon load from the death fields of the Civil War. The wagons were already backed up on the road. A curious quiet. The men had exhausted their shouts. They were left with small whimpering’s, tiny gasps of pain. Once more it is a woman who takes in the reality of the war to free the enslaved. The Newfoundland flight in 1919, the attempt to connect people across continents, continues today, and if you read the Internet carefully, you will most often see women behind the petitions and movements to relieve human suffering.

McCann’s ability to move his short declarative sentences into something surprising is present everywhere. When having dinner at a Lord Mayors grand house in Ireland, McCann describes the setting: The chandeliers in the Mansion House sparkled. The ceilings were tall. The paintings majestic. The rooms led into one another like fabulous sentences. The same can be said for the stories that make this novel soar.      – Sunny Solomon

Sunny Solomon holds an MA in English/Creative Writing, San Francisco State University. She is a book reviewer for “The Clayton Pioneer” and her poetry and other writing has been published in literary journals, one chapbook, In the Company of Hope and the collection, Six Poets Sixty-six Poems. She was the happy manager of Bonanza Books, Clayton, CA and Clayton Books, Clayton, CA. She continues to moderate a thriving book club that survived the closure of the store from which it began. Sunny currently lives next to the Truckee in Reno, NV.
More from this reviewer
PrevFlight Behavior
The Yonahlossee Riding Camp for GirlsNext