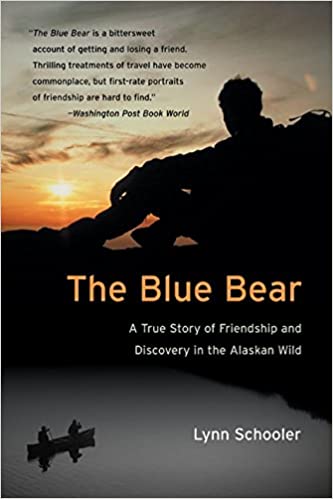 The Blue Bear, A True Story of Friendship and Discovery in the Alaskan Wild.

A one-of-a-kind story of breadth and depth.

The subtitle of Lynn Schooler’s The Blue Bear neatly summarizes its content. A True Story of Friendship and Discovery in the Alaskan Wild. The subtitle does not, however, convey the intensity of Schooler’s writing, the breadth of his knowledge, and the depth of his heart.

Paying customers, especially photographers, charter Schooler’s boat, the Wilderness Swift, to search Alaska’s Inside Passage for fine photo opportunities. Occasionally these passengers become firm friends with their captain, and such was the case with Michio Hoshino, a Japanese photographer renowned for his photographic eye. When Schooler timorously asks Hoshino about the key to his art, the artist replies, “A picture should make you think about a story.” Schooler heard the subtleties behind that suggestion. He himself has become a talented photographer, too, and he also has turned his Alaskan eyes and ears into stories as well. The Blue Bear tells a powerful story, not only of the friendship between Hoshino and Schooler but also of their ongoing search for meaningful photographic subjects, including the blue bear.

The blue bear is an elusive Alaskan creature, rarely seen and even more rarely photographed. Also known as a glacier bear, its fur is a silvery color that can appear almost blue in certain lights. Schooler and Hoshino make countless forays into locales where a blue bear has been spotted before, near streams rife with spawning salmon, and onto glaciers where a blue bear might roam. They have other adventures, too, including heavy rains, behemoth winds, and frightening encounters with the wild. But Schooler’s focus always turns back to the blue bear, the touchstone of their search for the essence of their Alaskan friendship.

I commented earlier on the breadth of Schooler’s knowledge and the depth of his heart. These are the two ingredients that set The Blue Bear apart from too many lesser examples of the genre we might call nature writing memoir. There’s meat on the bones in Schooler’s stories. He tells of early explorers and their often unfortunate encounters with the natives who populated the Inside Passage shores. He tells of later inhabitants, too, the men and women who have struggled to survive in the wild. He is a regular encyclopedia of information about the flora and fauna of southeast Alaska. His writing is never dry, however. It never sounds bookishly scientific. Rather, he communicates in stories, describing the antics of the matriarchal orcas, for example, or the special strategies for devil’s club propagation.

Sometimes Schooler turns more philosophical, especially when he and Hoshino speculate about the unexpected opportunities for living life to the fullest, the sweet encounters that can mark a special day. Photographing whales, for example, involves long periods of waiting and then glorious moments of whale shenanigans, blowing and diving and prancing alongside the Swift while the photographers try to capture what they see.

Schooler also shares feelings for others. Both men, in fact, demonstrate an inordinate amount of caring. But Schooler opens his heart fully, sharing lost loves, reliving the long slow cancerous death of his father, even admitting his own onshore uneasiness in crowds. The life of a guide suits him well, as strangers come and go in his life. Hoshino, however, is anything but a stranger. It’s a pleasure to watch their intellectual friendship deepen as the years pass by, and to see how comfortably they can overcome adverse conditions by working smoothly together.

Near the end of The Blue Bear Schooler writes, “As a photographer, Michio taught me how to look with my eyes—but as a friend, how to see with my heart.” Reading Schooler’s words, is to look, to see, and to love Alaska’s Inland Passage and its countless treasures so richly shared by the captain of the Wilderness Swift.  –  Ann Ronald 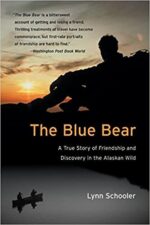 Ann Ronald is a retired English professor from the University of Nevada, Reno. Author of dozens of reviews, she’s also written a number of books about the American West. They include literary studies such as The New West of Edward Abby and Reader of the Purple Sage, cultural studies such as GhostWest and Oh, Give Me a Home, and nature writing such as Earthtones: A Nevada Album. Her latest is a work of fiction, Friendly Fallout 1953. Since retiring, she’s been reading vociferously, so “Bookin’ With Sunny” is giving her a wonderful opportunity to share thoughts about her favorite new discoveries.
More from this reviewer
PrevThe Winter Soldier
Tahoe JadeNext