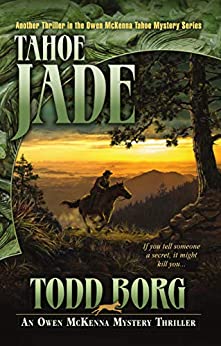 Tahoe Jade, an Owen McKenna Mystery Thriller is back.

A summer read with ties to Lincoln, Stanford, and yes, Lake Tahoe.

Finally, it’s here! Summer at last, and not just because we on the west coast have been roasting of late, but because I just unwrapped and read Todd Borg’s latest Owen McKenna Mystery, Tahoe Jade, so quickly I didn’t have a chance to take it to the pool.

As in all Borg’s mysteries, the prologue tells of the first murder. But this murder happens more than one hundred years ago to a young pony express rider killed for his horse while on his way to deliver mail to Lake Tahoe. Among the letters he carries is one from President Abraham Lincoln to Governor-Elect Leland Stanford. Even an amateur sleuth knows that the Lincoln letter and its mysterious contents bode more importance than the deceased rider.

Nothing in Borg’s writing should go unnoticed. In Chapter One, we meet and greet our stalwart ex-SF-cop-now-private-investigator Owen McKenna and his longtime girlfriend Street Casey, along with his constant four-legged companion, Spot, affectionately known as “his largeness,” a Harlequin Great Dane. Spot comes to mind when we watch Street demonstrate her parkour finesse, a sport defining the skilled beauty of running on foot over boulders. Not exactly everybody’s idea of fun. No spoiler here, but it is a sport to remember. The expected call for help from a soon-to-be client occurs before the chapter ends. “Please don’t hang up! Please hear me out. I’m not crazy!”

Here are the first facts: Jade Jaso (new client) has received a work-related death threat; Jade’s mother died when she was young and came from a long line of female Chinese jade carvers named Jade; her father is Basque and raised Jade on his own and recently died from a fall at their property in Christmas Valley on the South Shore of Lake Tahoe. More facts slowly emerge.

At McKenna’s suggestion, Jade spends the night at a motel, and her house is broken into, leaving messy evidence that although nothing had been stolen, something had certainly been searched for. Jade owns three horses, one of which is a prized thoroughbred purchased by her father when its owner, a jailed felon, could not pay the horse’s boarding fees, allowing Jade’s dad to buy it under the California equine lien foreclosure process. Such a fact, for this reviewer, is one of the fun things about reading a McKenna mystery.

Jade had been a Sacramento Fire Department firefighter and took early retirement after her involvement in a fellow firefighter’s death under questionable circumstances. With good reason, Jade believes the threat to her life is related to the break-in. Now living alone in not heavily populated Christmas Valley, McKenna fears for her safety and believes more than the Sacramento Fire Department is involved.

Add to all this: a neighbor who leaves the area to attend a Buddhist retreat in China; and the now possibly questionable death of Jade’s father; a pony express re-enactment organization; a wealth of historical facts concerning stolen Chinese carvings; and then a long and strong trail of female abuse. To keep this broiling, Borg throws in a near-fatal aerial hunt for the surprising kidnapping of Jade and her horses.

Tahoe Jade may not contain the fast-paced thrills in other McKenna mysteries, but Borg’s arsenal in Jade reaches deeper than firearms and speed. California history, literary-connected characters, cultural traditions, and an overriding interest in women and their place in this world make Tahoe Jade a historically satisfying read. In this mystery, I may have missed some of Borg’s amazing gifts for twists and turns and some of the fastest punches ever, but gosh, it was sure good to have McKenna and his Lake Tahoe crew in my hands again.  –  Sunny Solomon 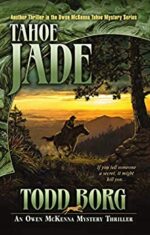 Sunny Solomon holds an MA in English/Creative Writing, San Francisco State University. She is a book reviewer for “The Clayton Pioneer” and her poetry and other writing has been published in literary journals, one chapbook, In the Company of Hope and the collection, Six Poets Sixty-six Poems. She was the happy manager of Bonanza Books, Clayton, CA and Clayton Books, Clayton, CA. She continues to moderate a thriving book club that survived the closure of the store from which it began. Sunny currently lives next to the Truckee in Reno, NV.
More from this reviewer
PrevThe Blue Bear
The Casual VacancyNext