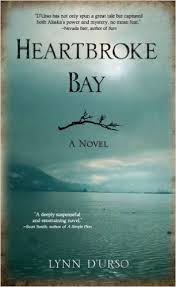 Heartbroke Bay: A Novel of Alaska

To tell the story of Heartbroke Bay, an Alaskan fjord known locally as Lituya Bay and now part of Glacier Bay National Park and Preserve, Lynn D’Urso combines truth and legend, fact and fiction, plausibility and imagination. Jack London narrated the shocking events in a 1906 McClure’s Magazine short story, “The Unexpected.” D’Urso’s version differs from London’s, although both embroider what probably happened on that distant shore during the winter of 1899. Four men and a woman sailed north to prospect for gold. Foolish beyond measure, their actions and the consequences are the basis for Heartbroke Bay: A Novel of Alaska.

Employed by the cantankerous Lady Hamilton as a lady’s maid, an Englishwoman traveling in America, Hannah Butler precipitously escapes into the arms of Hans Nelson. The Norwegian gentleman appears well-to-do, but in truth he has borrowed heavily to try his luck in the Yukon. So Hannah finds herself married to a man she hardly knows, in totally unforeseen circumstances. Neither Skagway nor Sitka provides sufficient opportunities for the couple, and so they join forces with three other men, each seeking his fortune in the far north.

Dutch provides the make-believe-tale that convinces them to head for Lituya Bay, gigantic Harky provides the muscle, and Michael provides the cutter that will sail them there. Hannah will cook, Hans will do whatever is necessary to bring success. So the relative strangers gather supplies, load the cutter, and set off with little knowledge of what might be encountered once they are totally cut off from civilization.

Do they find gold? Do they all survive? To learn the answers, you’ll have to read D’Urso’s novel. Suffice to say that the group dynamics grow more and more difficult, as do their living conditions. Unfamiliar with Alaska occurrences or Alaska seasons, they make innocent assumptions and foolish mistakes. A list of potential problems includes a glacier calving icebergs, an earthquake, incessant rain, blizzards, marauding bears, and insufficient food. A nearby Indian encampment watches the strangers’ antics in disbelief. All the while, the four men are driven by their thirst for riches. Despite the trials, they keep on digging, sluicing, searching, over-taxing their exhausted bodies. Hannah cooks and mends their tattered clothes, cooks and mends incessantly.

The psychological tensions increase as their isolation complicates their lives. Hannah, married to a man she hardly knows, a man consumed by his search for riches and with little regard for anything or anyone else, finds herself attracted to Michael, a glib Irishman with a facile style. And vice versa. To complicate matters further, the group begins disagreeing about how their growing stash of gold should be shared. If you use your imaginations, you’ll realize how Heartbroke Bay might explode.

D’Urso does a fine job of depicting both the psychological and the physical. Effectively building toward a startling denouement, she draws a reader into her story. You almost feel like you’re there, sharing the meager food, braving the storms, catching each other’s eyes in untoward ways. Heartbroke Bay is one of those novels that you can’t stop reading, one that pulls you toward its climax with agonizing disbelief. I most definitely recommend it, especially to anyone who enjoys watching western history unfold in all its conceivable dimensions.   – Ann Ronald 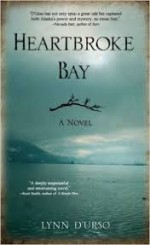 Ann Ronald is a retired English professor from the University of Nevada, Reno. Author of dozens of reviews, she’s also written a number of books about the American West. They include literary studies such as The New West of Edward Abby and Reader of the Purple Sage, cultural studies such as GhostWest and Oh, Give Me a Home, and nature writing such as Earthtones: A Nevada Album. Her latest is a work of fiction, Friendly Fallout 1953. Since retiring, she’s been reading vociferously, so “Bookin’ With Sunny” is giving her a wonderful opportunity to share thoughts about her favorite new discoveries.
More from this reviewer
PrevThe Interpretation of Murder
The MuleNext