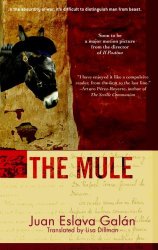 Meet Castro. He’s a simple young man in his early twenties from the area around Granada in southern Spain. Although most of his family is fighting for or has sympathy with the republican cause in the 1930’s Spanish Civil War, Castro is fighting for the falange, the army of the monarchy, the Church, and, of course, General Francisco Franco. But Corporal Castro is no fighter. He was a stable boy for a Spanish lord and landowner as a youngster, so he serves in the army as a keeper of some two dozen mules.

His desires are few and simple—the definition of soldierly—survive, get fed, drink wine, smoke cigarettes, talk about sex, hang out with his comrades, and go home. In this satirical novel, there is hardly an ideal, sacred cause, or altruistic act to be found. Castro is not a cynic. Irony plays no part in his makeup. It would never occur to him to say that war is absurd. That would require a generalization. He’s just basic and a bit charming.

These are his desires (few and simple) until he meets Valentina, a stray mule, whom he inserts into his stock of twenty-four. Now he has twenty-five mules, but when he fills out his official reports, he neglects to include Valentina. He has post-war plans for Valentina that do not include her becoming another army mule. Castro shows more concern for and emotional connection with Valentina than any human, except possibly Conchi, a proper young woman whom Castro would like to marry.

Of course, war is about having adventures and then inflating them so that they become disconnected from any reality, save imagination. As Corporal Castro moves the heavily laden mules from place to place in support of this offensive or that defensive operation, adventures find him. As a result of one serendipitous escapade, Castro comes face-to-face with an entire squad of enemy soldiers. He is an unlikely hero, but, nonetheless, super hero he becomes, providing him a reason to lie excessively and an opportunity to get a medal, meet General Franco, and be given succor by a beautiful lady named Pilar. She sees him for what he is—an uncouth country bumpkin—but she is bored and Castro is semi-sentient.

Castro is a delightful and unpredictable character. His adventures take him on an entertaining if unusual odyssey. Although he is the opposite of Odysseus in most respects, he does have one similar aim, one transcendent motivation—to return home. Castro, in one of his more lucid moments, understands too well that his return home will probably mean his resumption of a dead-end life. It is this realization that leads him to have a heart-to-heart talk with Valentina and explain why their relationship will not have a happily-ever-after ending. War is hell.   –  Neal Ferguson

The Mule appears to Galan’s only title translated into English. 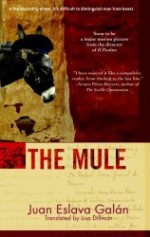 Neal Ferguson is a self described Anglo-phile. After studying for a PhD in British history and doing research for a year in various British archives, he came to the University of Nevada in 1970 to teach. Soon he found himself in administration where he remained until 2003. After returning to full-time teaching a decade ago, he decided to concentrate his teaching energies on Medieval British history and various global aspects of World War II. Dedicated to Ambrose Bierce’s proclamation that the purpose of war is to teach Americans geography, Neal insists that his students accompany him (in class) to sundry east European rivers and steppes, African deserts and jungles, south-east Asian mountain ranges and peninsulas, and small islands and coral reefs in the Pacific. Currently he is writing a book about the ups and downs of General Douglas MacArthur’s military reputation.
More from this reviewer
PrevHeartbroke Bay
Wartime Devotion – Heroism, Friendship and SacrificeNext