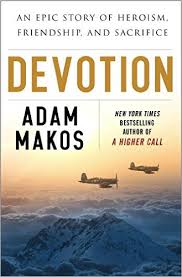 Devotion: An Epic Story of Heroism, Friendship, and Sacrifice

If you are thrilled by the fantasy of hurtling through the air at four hundred miles per hour pulled by a hugely powerful propeller driven engine, you will probably enjoy this book since Makos’s descriptions of aerial artistry often reach 5 G’s. Alternatively, if you are intrigued by a tight but rare friendship between two Navy pilots, one black and one white, one poor and rural, one wealthy and urban, then this book may also float your boat. The white pilot is a Naval Academy graduate who seems destined for success. The black pilot, the nation’s first Navy carrier pilot, cannot get a drink, a meal, a hotel room, or respect in most of America.

The backdrop to this thoroughly researched story is the Korean War in 1950. Two Navy pilots are assigned to the same Corsair squadron (last of the propeller driven fighter aircraft) on the aircraft carrier USS Leyte. Both have “the right stuff” and fly several dozen missions off the Leyte in support of the U.S. Marines fighting and dying at the Chosin Reservoir in North Korea in November and December 1950. They are being attacked by hundreds of thousands of Chinese soldiers who have poured from Manchuria across the Yalu River into North Korea. The temperatures drop well into the double digits below zero. The Marines stage a fighting withdrawal at the “Frozen Chosin” in a battle that has since joined “the shores of Tripoli” in the pantheon of Marine Corps legends.

Devotion tracks the lives and intersecting naval careers of Ensign Jesse Brown (Ohio State University 1948) and Lt. (JG) Tom Hudner (Annapolis 1946) until the defining battle of the Chosin Reservoir in early December 1950. Hudner was Brown’s wingman since Brown had more piloting hours than did Hudner even though his rank was higher than Brown’s. As a wingman, Hudner’s main task was to follow Brown wherever Brown went in the air in order to protect him from being pounced on by enemy aircraft. Their purpose in Korea, however, was usually to drop bombs on and strafe enemy soldiers attacking the Marines rather than searching for enemy planes in the sky. As a result, Brown chose the time to descend close to the ground and to face the inevitable hail of shells and bullets that the opposing “white coats” (Chinese) soldiers sent their way. Hudner flew closely behind.

Makos has made extensive use of private letters, oral histories, and interviews to piece this exciting story together. Although the author asserts that it is a uniquely American story of bravery, devotion, and friendship, there is nothing about it to set it apart from how warriors have acted towards each other for thousands of years in many cultures. For me, then, my emotional response to Devotion was a consequence of it being a human, not just an American, story. I am being careful not to give the story away, but if you stick with it to its climax you may need some Kleenex.    –  Neal Ferguson

Also available by Adam Marcos: A High Call (with Larry Alexander); Voices of the Pacific (with Marcus Brotherton). 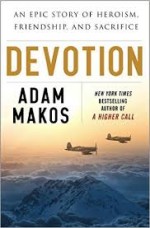 Neal Ferguson is a self described Anglo-phile. After studying for a PhD in British history and doing research for a year in various British archives, he came to the University of Nevada in 1970 to teach. Soon he found himself in administration where he remained until 2003. After returning to full-time teaching a decade ago, he decided to concentrate his teaching energies on Medieval British history and various global aspects of World War II. Dedicated to Ambrose Bierce’s proclamation that the purpose of war is to teach Americans geography, Neal insists that his students accompany him (in class) to sundry east European rivers and steppes, African deserts and jungles, south-east Asian mountain ranges and peninsulas, and small islands and coral reefs in the Pacific. Currently he is writing a book about the ups and downs of General Douglas MacArthur’s military reputation.
More from this reviewer
PrevThe Mule
What is revealed in wartime lettersNext