Home » Reviews » Fiction » What is revealed in wartime letters

What is revealed in wartime letters 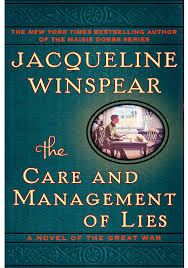 The Care and Management of Lies

Best known for her Maisie Dobbs post-World War I detective series, Jacqueline Winspear introduces an entirely new cast of characters in The Care and Management of Lies. Whether these men and women evolve into another series remains to be seen, but this particular novel is most appealing. It, too, takes place in England and it, too, involves the effects of the Great War, although The Care and Management of Lies actually opens in 1914, shortly before the fighting became a reality.

The story centers on two close friends, Kezia Marchant and Thea Brissenden. While Thea is evolving into an adamant suffragist, Kezia is preparing to marry Thea’s brother, move to the Brissenden family farm, and begin a settled life of rural domesticity. Such divergent goals in life are fracturing the friends’ long-time intimacy. Just as Kezia cannot understand Thea’s political inclinations, so Thea cannot comprehend Kezia’s willingness to leave London to live in Kent. Moreover, Kezia has little practical experience, so she seems ill-suited to function successfully as the wife of a farmer. Her cooking skills, for example, leave something to be desired.

Five months after the wedding, England declares war on Germany and Tom Brissenden enlists. Thea, also compelled to serve her country, volunteers as an ambulance driver. While the siblings soon are at the front lines, confronting all the horrors of war, Kezia remains on the farm, far from military action. Much of The Care and Management of Lies consists of letters and cards sent back and forth between them. How much to tell? How much to withhold? Thus, The Care and Management of Lies.

Other characters play roles in this novel, too. Kezia’s father, a parson who also corresponds with his daughter, ends up at the front. And a neighboring Kentish landowner serves as Tom’s commanding officer. Family history complicates their relationship, adding another dimension to the ordeals of war. Meanwhile, Kezia uplifts everyone’s spirits with her correspondence, detailing imaginary meals she might cook for her beloved Tom. His fellow soldiers, in fact, insist that he read his letters aloud because Kezia’s words remind them of home. One detractor, however, dubs him “Private Gravy.”

The culinary correspondence is ironic, of course, because Kezia knew next to nothing about cooking when she was first married. Ironic, too, is Thea’s wedding present to her friend, a 1911 publication entitled The Woman’s Book, which purports to teach a young bride all she needs to know about housekeeping and pleasing her husband. Thea’s gift, a sardonic jab at Kezia’s innocence, offers a running commentary on what really is happening in both their lives.

The Care and Management of Lies offers a very smart, in-depth assessment of what happens when war replaces peace and when non-combatant personalities are forced to fight. Winspear captures the duality of the times, the chaos of the European trenches versus the helplessness of those remaining in England, the brave helplessness of the soldiers versus a British serenity turned topsy-turvy. Winspear, as she does in all her Maisie Dobbs novels, masters the ambiguities of human emotions. Faced with unexpected twists of fate, her characters endure, heroically. Caught in the madness of war, they survive as best they can. Just now, the hundredth anniversary of the Great War is eliciting countless new books about the ordeal. The Care and Management of Lies is surely one of the best.   – Ann Ronald

Also available by Jacqueline Winspear: Maisie Dobbs; Birds of a Feather; Pardonable Lies; A Lesson in Secrets; The Mapping of Love and Death; An Incomplete Revenge; Elegy for Eddie; Among the Mad. 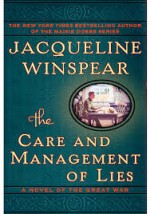 Ann Ronald is a retired English professor from the University of Nevada, Reno. Author of dozens of reviews, she’s also written a number of books about the American West. They include literary studies such as The New West of Edward Abby and Reader of the Purple Sage, cultural studies such as GhostWest and Oh, Give Me a Home, and nature writing such as Earthtones: A Nevada Album. Her latest is a work of fiction, Friendly Fallout 1953. Since retiring, she’s been reading vociferously, so “Bookin’ With Sunny” is giving her a wonderful opportunity to share thoughts about her favorite new discoveries.
More from this reviewer
PrevWartime Devotion – Heroism, Friendship and Sacrifice
Deadbeat DamsNext