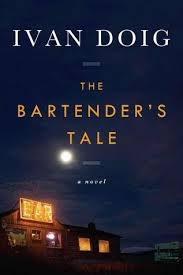 The Bartender’s Tale, recalled by his son.

Ivan Doig’s novels, like The Bartender’s Tale,  circle around themselves, like a helix coiling both inward and out. The Bartender’s Tale, for example, takes place alongside English Creek, the setting for Doig’s 1984 novel titled English Creek. We’ve been there before with other people, but we haven’t met this particular cast of Bartender’s characters. This newest tale also re-introduces certain events from Doig’s 1996 novel, Bucking the Sun. Those events occurred years earlier, but their results reverberate. A reader need not have read either of these predecessors to enjoy The Bartender’s Tale; its actions stand alone. But those conversant with Doig’s other books will find their imaginations piqued by the echoes and spirals of time and revisited places.

All of Doig’s novels are set in Montana, some in its distant past, others in Montana’s present. The Bartender’s Tale splits the difference, occurring in between past and present, during “that year of everything, 1960.” Russell Harry, the narrator, turns twelve in 1960, and that’s when his world turns upside down. Since Rusty was six years old, he has lived with his father, Tom Harry, the bartender of the infamous Medicine Lodge saloon. Tom’s infrequent but mysterious disappearances occasionally disrupt Rusty’s equilibrium; otherwise, Rusty is a happy boy. Then three new faces appear on the scene.

The first is Zoe, another twelve-year-old, whose parents just bought The Top Spot, the restaurant where Rusty eats dinner every evening. “I was close to panic,” Rusty reports, “thinking of endless suppertimes ahead with the two of us about as conversational as the salt and pepper shakers. How was this going to work?” By the time that first meal has ended, with the bulk of the novel still to unfold, he has a revelation. “I was in love with Zoe. I have been ever since.”

The second and third unexpected entrants are a mother and her daughter, Proxy and Francine. Proxy is part of Tom’s checkered past, a taxi dancer and bar gadfly from Bucking the Sun’s Fort Peck. She and Francine arrive at the Medicine Lodge saloon with secrets and ulterior motives that Rusty is slow to apprehend. Watching him unravel his father’s past and come to an understanding of adult behavior forms the gist of this subtle and sophisticated coming-of-age novel.

While I was reading, and now that I’m writing this review, I’m wondering why Doig named his book The Bartender’s Tale? Perhaps his imagination is more finely tuned than mine. For sure, The Bartender’s Tale is Rusty’s tale from start to finish. Every event is filtered through his twelve-year-old consciousness, and every interpretation stems from his observations and the conversations he overhears. In effect, however, Rusty is reconstructing his father’s storied past, is trying to figure out the bartender’s tale and how that tale affects his own existence. The bartender’s history holds the key to Rusty’s sense of self. Hence, The Bartender’s Tale.

I have been a fan of Ivan Doig’s prose for his entire career. The Bartender’s Tale did not disappoint me. The narrative voice never falters and the tension never wavers. The scenes alternate between poignant father-son exchanges, glimpsed re-enactments of the past, and heart-pounding action in the present. The ending brought unexpected tears to my eyes, but now I’m smiling as I recall the plot. Those readers who love Doig’s Montana will surely appreciate The Bartender’s Tale. Those new to his world will surely want to read more. – Ann Ronald 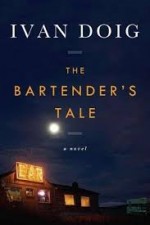 Ann Ronald is a retired English professor from the University of Nevada, Reno. Author of dozens of reviews, she’s also written a number of books about the American West. They include literary studies such as The New West of Edward Abby and Reader of the Purple Sage, cultural studies such as GhostWest and Oh, Give Me a Home, and nature writing such as Earthtones: A Nevada Album. Her latest is a work of fiction, Friendly Fallout 1953. Since retiring, she’s been reading vociferously, so “Bookin’ With Sunny” is giving her a wonderful opportunity to share thoughts about her favorite new discoveries.
More from this reviewer
PrevThe Long Way Home
The GoldfinchNext