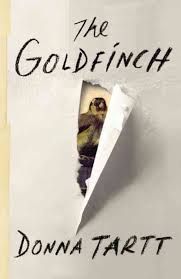 Big book (784 pages!), big story. I was initially daunted by its size, but once into it, I couldn’t put it down. The Goldfinch is a multilayered saga about coming of age, friendship, love, loss, abuse, neglect, reconciliation, and redemption; good, great, bad and horrifying, all incredibly realistically portrayed.

The Goldfinch begins with Theo, our narrator, recalling his mother’s death in an explosion in a New York art gallery minutes after she has explained to the then thirteen year-old Theo why the painting The Goldfinch was one of her favorites. He is dazed, injured and struggling to leave the disaster area when he is beseeched by a dying man to take the ring from his finger and to rescue The Goldfinch picture from the rubble.

Before his gambler father appears and takes him to live in Las Vegas, Theo meets Hobie, the business partner of the dying man who gave him the ring. Hobie becomes a beacon of hope and stability in Theo’s increasingly chaotic life. His two years in Las Vegas draw him into a world of abuse, neglect, drugs and the friendship of Boris, “He was pale and thin, not very clean, with lank hair falling in his eyes and the unwholesome wanness of a runaway, callused hands and black-circled nails chewed to the nub… a kid who might conceivably be sitting on a sidewalk somewhere with a stray dog on a rope.”

With the death of his alcoholic father, Theo flees across country, taking Popper, his father’s girlfriend’s dog and returns to Hobie where life becomes a little more stable. He finishes school and develops a career in antiques. Boris, now a wealthy, underworld “businessman,” unexpectedly shows up in Theo’s life again, and so begins a frantic chase across Europe with nefarious individuals aplenty. For all this, The Goldfinch ends rather quietly with most of the loose ends tied up, but not as I was expecting, and on reflection, in a far more pragmatic way.

The painting holds the story together. Theo loves it, “The painting slid out more easily than I’d expected, and I found myself biting back a gasp of pleasure. It was the first time I had seen the painting in the light of day. In the arid room – all sheetrock and whiteness – the muted colors bloomed with life,” but he is terrified of the repercussions of keeping it or giving it back, believing he would be judged a thief and go to jail. The painting profoundly affects Theo; his need to have it; his struggles to keep it hidden and safe in his increasingly frenzied life; his desperation to return it; and eventually it launches his redemption.

Note: There really is a painting titled The Goldfinch, it is tiny. It is 13 x 9” in size, painted by a lesser known Dutch master, Carel Fabritius,

and hangs safely in the Hague. It was part of a travelling exhibition of Dutch masters that came to the U.S. and created quite a sensation because of its connection to Tartt’s book.

The Goldfinch won the Pulitzer Prize for fiction and the Andrew Carnegie Medal for Excellence in Fiction for 2014, and is Tartt’s third novel, following more than ten years after her second novel, The Little Friend, and twenty years after her much acclaimed The Secret History. Tartt was born in Mississippi and now divides her time between New York and Virginia. – Vivienne French 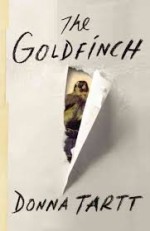 Vivienne French was born in New Zealand and grew up a voracious reader, much to the thanks of her “Mum” and fourth grade teacher, Mr. Sanders. Her short stories and articles have been published in women's magazines, specialty magazines and her hometown newspaper. She has been a resident of Reno, Nevada for twenty-nine years and has worked professionally for a number of nonprofit service organizations. She currently teaches grants writing at Truckee Meadows Community College and serves on the board of the Friends of Washoe County Library. She looks forward to getting back her favorite pastime, reading for the love of reading.
More from this reviewer
PrevThe Bartender’s Tale
A Wedding in ProvenceNext