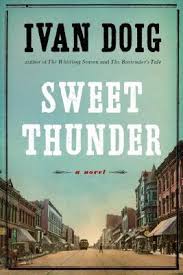 Ivan Doig’s Sweet Thunder follows one of the characters from his earlier novel, The Whistling Season, into maturity. Perhaps you’ll remember him as Rose’s brother, the happy-go-lucky young school teacher who brought a one-room schoolhouse to light and laughter. Sweet Thunder opens when Morrie Morgan returns to Montana after an enforced and itinerant absence of several years. Settling in Butte because he has been offered a palatial house there, Morrie finds employment as the editorial writer for an upstart tabloid in competition with the more conservative local newspaper favored by Anaconda Copper. In the 1920s, Anaconda functioned as a virtual dictatorship, with long hours, harsh conditions, and low wages for its employees. Thunder, founded for the purpose of touting union membership, intends to counter the industrial behemoth.

Morrie is a narrator with a sardonic wit and a reckless joie de vivre. A graduate of the University of Chicago, he is a man of book learning, too. But he never has been able to settle down. This time, accompanied by a new bride, he finds the perfect niche, one that allows him to wield his acerbic pen and his innate good humor in a winning combination. His light-hearted narration is charming, although the novel’s underlying issues of unionization versus capitalistic greed are sobering throughout.

Sweet Thunder also allows Doig to show off his own writing skills. Through the book, I was struck by Doig’s literary powers, his way with words. I’ve written elsewhere about Doig’s finesse as a gifted novelist, so this time I’d like to concentrate on his powerful prose. Here is a fine example describing the fledgling newspaper:

“Right from the very start, the atmosphere around the Thunder held that tingle of anticipation that the air carries before a rain. The spell was contagious. With its aroma of ink and paper and cigarette smoke and its staccato blurts of writing machines and jingling of telephones, the newsroom was a strangely exciting place where nothing definitive seemed to be happening, yet everything was. A newspaper is a daily miracle, a collective of collaboration of wildly different authors cramped into columns of print that somehow digest into the closest thing to truth about humankind’s foibles and triumphs there is, i.e., the draft of history.”

If I were teaching a creative writing course, I would point out how the syntax replicates the stutter-step process of newspaper publication. A short sentence, the “contagious” spell; and then two longer ones, stretching out the course of gathering and picking through and writing about the day’s news. I also would mention the diction, where the word choices are crisply unexpected: “staccato blurts” and “authors cramped into columns,” for example. Even the imagery is fresh, with its “tingle of anticipation” preceding a change in the weather. And this is just one paragraph. I could page through the entire novel and find instances of a writer wholly in control of what appears on the printed page.

When I reviewed The Bartender’s Tale for “Bookin’ with Sunny,” I wrote that “I have been a fan of Ivan Doig’s prose for his entire career.” Reading Sweet Thunder doesn’t change my mind. Doig is still a premier western writer, one everyone should read and enjoy, and Sweet Thunder is enchanting throughout. (While I was drafting this review, the news came of Ivan Doig’s death. I’ll miss him and his wonderous prose, as will attentive readers everywhere.)   – Ann Ronald 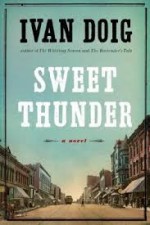 Ann Ronald is a retired English professor from the University of Nevada, Reno. Author of dozens of reviews, she’s also written a number of books about the American West. They include literary studies such as The New West of Edward Abby and Reader of the Purple Sage, cultural studies such as GhostWest and Oh, Give Me a Home, and nature writing such as Earthtones: A Nevada Album. Her latest is a work of fiction, Friendly Fallout 1953. Since retiring, she’s been reading vociferously, so “Bookin’ With Sunny” is giving her a wonderful opportunity to share thoughts about her favorite new discoveries.
More from this reviewer
PrevIn Need of a Good Wife
Among ThievesNext