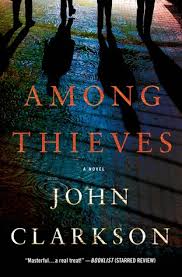 “Among Thieves?” Shouldn’t it be “Honor Among Thieves?” Nope, author John Clarkson got it right; there is no honor among the thieves and other lowlifes found in this crime thriller.

I’m reviewing Clarkson’s book because by the time the “Clayton Pioneer” (the Northern CA paper that publishes my reviews) came out, Mother’s Day had come and gone and “Among Thieves” would make a great Father’s Day gift. Every character in the novel is a thief, thug, or ex-con, but some of the bad guys (and two women) are badder than others. Clarkson makes you read a bit before the plot takes shape and you know, or think you know, who the good bad guys are. The story opens: “Tuesday morning started out damn near perfect. Right up until Demarco Jones told James Beck, ‘Manny wants to kill somebody.’” Beck, an ex-con himself, knows that if Manny used “the word kill, it was not metaphorical.”

Beck is one of the good bad guys and ex-cons Manny Guzman, Demarco Jones and Ciro Baldassare are Beck’s partners, operating out of a bar in Brooklyn’s Red Hook neighborhood. The potential kill-ee is a crooked Wall Street guy who has injured, fired and threatened to blackball Manny’s cousin Olivia Sanchez from ever working on Wall Street again. Olivia suspects some very bad trading in a major hedge fund at the firm where she is now no longer employed. Olivia turns to Manny for help, Manny turns to Demarco, and Demarco to Beck, knowing that cooler heads than Manny’s should prevail. And Beck is nothing if not cool, but after calling on Olivia to find out what she expects Manny to do for her, he realizes Olivia’s problem involves much more than her being fired.

That problem quickly becomes Beck’s and goes from singular to plural. The funds, not quite hedged bets, are in the millions and involve mobsters, a Russian arms dealer, the U.S. military, common thugs, an ex-NYPD officer as bodyguard for the Wall Street guy, Russian mobsters to protect the arms dealer and offshore bank accounts to protect all those illegal millions. Did I mention Glocks? Initially, the RBGs (really bad guys) go after Olivia who knows too much, then Beck for trying to help Olivia. Russian or home-grown, Clarkson gets it exactly right when he describes mobster Mr. Kolenka as a man with “charisma” and “something more sinister or perhaps frightening lurked underneath.”

On Beck’s side are ex-cons who know their way around weapons like a Benelli M3 shotgun, a Winchester 12 gauge, a Charter Arms Bulldog .44 caliber revolver, a Browning Hi-Power 9-mm automatic, and a humble 6 in. Bucheimer sap. Beck’s “band of merry men” includes a doctor on call to fix those gunshot wounds, head butts and poked eyes, and an attorney, computer hacker and bevy of hoods to cover his back.

The story accelerates like Beck’s customized 2003 Mercury Marauder. Clarkson piles one bloody and brutal confrontation on another, with a cast of well-drawn characters. And these characters are almost always on the move. In fact, the entire story takes barely a bit more than three days. Slam-bam and the rest of that saying – I told you, this is a guy book. Keeping track of the money becomes a deadly shell game Beck plays with cunning and “an alert state of calm.” He’s almost always ready for what comes next, even if the reader is not. Happy Father’s Day. – Sunny Solomon

Also available by John Clarkson: Reed’s Promise; New Lots; One Way Out; One Man’s Law; And Justice for One. 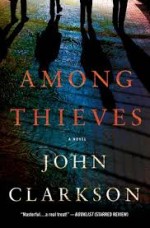 Sunny Solomon holds an MA in English/Creative Writing, San Francisco State University. She is a book reviewer for “The Clayton Pioneer” and her poetry and other writing has been published in literary journals, one chapbook, In the Company of Hope and the collection, Six Poets Sixty-six Poems. She was the happy manager of Bonanza Books, Clayton, CA and Clayton Books, Clayton, CA. She continues to moderate a thriving book club that survived the closure of the store from which it began. Sunny currently lives next to the Truckee in Reno, NV.
More from this reviewer
PrevSweet Thunder
Cozy Light Cozy NightNext