Home » Reviews » Fiction » In Need of a Good Wife

In Need of a Good Wife 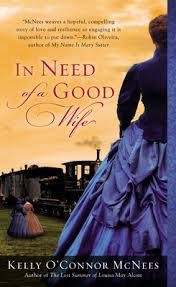 After the Civil War, many lonesome western men sent for wives from the east. Some marriages were arranged by brokers, some by charlatans, but all involved facilitating connections between men and women who had never before met. Kelly O’Connor McNees imagines one such collection of brides and grooms in her novel, In Need of a Good Wife. Clara Bixby, a New Yorker who has lost her husband and her job, reads a newspaper article about an isolated town in Nebraska called Destination, where there are no women and where the men long for female company. She corresponds with Destination’s mayor, and agrees to find suitable wives for those men desiring women in their lives. Sound far-fetched? Not at all. As McNees’ After Notes explain, contacts and contracts like this were not all that unusual.

Once Clara’s operation is set in motion, a series of letters are exchanged. One man will only accept a blonde. Another neglects to mention his five children. Still another wants nothing to do with a wife; he just needs a housekeeper. The women’s replies are just as deceptive, and just as charming. Once the commitments are arranged, Clara and her entourage leave on the train to distant Nebraska. Along the way, a series of mishaps reduces the number of potential brides. Thus, the arrival in Destination is a disappointment to most of the In Need of a Good Wife participants. The second half of the novel then pursues what happens next, how the men’s and the women’s respective fates unfold together and apart.

McNees adroitly moves from one human response to another. Sometimes poignant, sometimes bittersweet, and often hilariously funny, her novel explores a range of emotional reactions. Finding themselves in the middle of a flat grass prairie is a big surprise to the women from Manhattan. Meeting strangers and being expected to seamlessly integrate their lives proves to be difficult, if not impossible. Some of the arrangements go very well, while others are problematic. Even in the midst of apparently insurmountable hitches, McNees retains her own sense of compassion. This is a book that makes the reader smile, often. While tragedy hovers, it never intrudes.

Clara, it turns out, has fled New York to escape her own problems, which, of course, follow her to Nebraska. Her no-good husband, who ran off with another woman, suddenly reappears. An unfaithful gambling man, he has learned that Clara might now have money, earned by bartering for brides. But because she didn’t manage to get all the brides to Destination, she now has no money at all. How she copes, with George and with the unabated unhappiness of the bride-less grooms, is at the heart of In Need of a Good Wife, too.

I liked the characters; I loved their conundrums. Although her Nebraska geography is a little suspect at times, I appreciated McKees’ descriptions of the unsettled landscape, its empty spaces and its unpredictable weather. She has done her homework, investigating others who have written about those pioneer days. She cites authors such as Elinor Pruitt Stewart, Mollie Dorsey Sanford, Mari Sandoz, Willa Cather, women whose books I have read and studied, as her inspirations. In Need of a Good Wife rings true, giving us one more glimpse, one more facet, of pioneering women and their encounters with difficulties and happiness. Most of them were, in fact, in need of a good husband.  – Ann Ronald

Also available by Kelly O’Connor McNees: The Island of Doves; The Lost Summer of Louisa May Alcott. 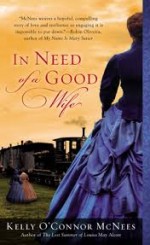 Ann Ronald is a retired English professor from the University of Nevada, Reno. Author of dozens of reviews, she’s also written a number of books about the American West. They include literary studies such as The New West of Edward Abby and Reader of the Purple Sage, cultural studies such as GhostWest and Oh, Give Me a Home, and nature writing such as Earthtones: A Nevada Album. Her latest is a work of fiction, Friendly Fallout 1953. Since retiring, she’s been reading vociferously, so “Bookin’ With Sunny” is giving her a wonderful opportunity to share thoughts about her favorite new discoveries.
More from this reviewer
PrevH is for Hawk
Sweet ThunderNext