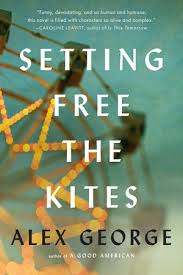 It’s not often that we read a book with as many laughs as tears, but Alex George has done it again with his new novel, Setting Free the Kites. The novel has been marketed as a coming of age story of a young Robert Carter who we meet on his first day of junior high. He is viciously bullied by a boy who has tormented him for all his elementary school years when suddenly the new boy in school, Nathan Tilly, steps in to rescue him.

Nothing particularly new here you might say. The author, however, has included adults in the coming-of-age genre not just as parents of the young teens, but as adults who are also coming of age. If we are lucky, as we see, maturity has no finish line.

The setting is Haverford, Main, a coastal city nearly dependent on its summer tourist business since the closure of its paper mill. The year is 1976. A sub-setting is the Carter family business, a seasonal amusement park, first begun by Robert’s grandfather and now operated by his father.

Mary and Sam Carter have two sons, Robert and Liam. Liam, already seventeen when the story opens, is wheelchair bound by Duchenne muscular dystrophy. Liam’s path to his eventual death is traveled separately by each member of his family and, as Robert’s and Nathan’s friendship grows, Nathan will walk it as well.

Nathan Tilly and his parents have recently moved from Texas, living outside Haverford, within sight of the ocean. His mother spends lonely hours on the beach and at home with her typewriter, and his father takes an old boat out fishing. He also builds and flies kites. The boys’ friendship grows quickly enough that when early-on Mr. Tilly falls to his death while flying a kite from the roof of his house, the reader understands that more than death will draw the boys together.

Setting Free the Kites is the story of Robert and Nathan and their life-changing friendship. It is also the hidden world of the anticipation and denial by Robert and his parents of Liam’s approaching death. It is the story of a seaside town and its passing landmarks and how those landmarks both challenge and seduce the youth who want only to leave town as soon as they’ve finished school.

Alex George’s storytelling stands out in is his ability to present life’s harsh realities with a tough tenderness. The enormous emotional chasm created by the death of a child or spouse, or friend, and its effect on all those connected to those deaths, has seldom been written with such heartbreaking truth. The strengths and weaknesses exhibited by all the novel’s characters remind us that loss can also be another word for growth. And growth, after such losses, does not come easily, especially the loss of a child, regardless of age.

How Ann and Sam Carter deal with the eventual death of their son, Liam, sets the stage for all the expected and most unexpected events that bring them to the brink of ending their relationship with each other, Robert and the town. I can’t think of a character in this novel that does not demand one’s attention. Without giving any more of the story away, it is enough to say that by the end of the novel, George brings all the loose ends together demonstrating his prowess as a master storyteller.

American music is important in this novel just as it is in George’s first novel, A Good American. Alex George has a unique talent to capture the life of boys and men in ways I have not read before, and yet the women in his two novels are pivotal. Setting Free the Kites is both the title of the book and ultimately, powerful words to live by.   –  Sunny Solomon 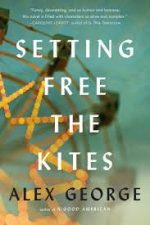 Sunny Solomon holds an MA in English/Creative Writing, San Francisco State University. She is a book reviewer for “The Clayton Pioneer” and her poetry and other writing has been published in literary journals, one chapbook, In the Company of Hope and the collection, Six Poets Sixty-six Poems. She was the happy manager of Bonanza Books, Clayton, CA and Clayton Books, Clayton, CA. She continues to moderate a thriving book club that survived the closure of the store from which it began. Sunny currently lives next to the Truckee in Reno, NV.
More from this reviewer
PrevCeline
Salt HousesNext