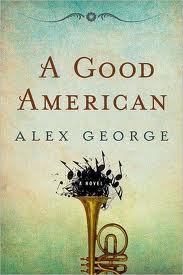 Sometimes when picking a new book to review, it’s best not to look at the advance praise printed on the back cover. Words like “epic, intimate, triumph, tragedy and funny” did not prepare me for what was in store in Alex George’s debut novel, A Good American.

The tale begins with a song, sung with love by Frederick Meisenheimer. He is hiding behind a bush in the Grosse Garten in Hanover, Germany as the woman of his dreams, Jette Furst, approaches. Frederick’s voice, “as pure as a freshly struck bell,” falls on Jette “like a shower of jasmine.” My first thought on reading this was, Are you kidding? But I trusted George and forged ahead. He wastes no time; by Chapter Two, they have fallen in love, Jette is pregnant three pages later, and by Chapter Three, they board the good ship Copernicus and are married by its captain before setting sail for “the Land of the Free” in the year 1904.

Most European immigrant sagas begin with New York as both destination from a past and portal to a future. But the Copernicus’ destination is New Orleans, and it is there that the Meisenheimers first set foot on American soil. From New Orleans, Frederick and a very pregnant Jette, in an unlikely series of events, find themselves in Beatrice, Missouri, the city in which their family will take root.

James Meisenheimer, the second of Frederick and Jette’s four grandsons, is the narrator who speaks of the characters and incidents that leave their marks on three generations of Meisenheimers. Singing and music run through the narrative, from Frederick’s operatic beer hall singing to ragtime, the beginnings of blues, barbershop harmony and all the way into the close harmony of the four Meisenheimer grandsons who are equally sought for performing not just at weddings, but funerals, as well. Music provides the historical context of the family’s experience which includes two world wars, indifferent and murderous racism, natural disasters, economic failure, prohibition and the social mores of modern America.

Music and love are at the core of this novel, and with the inventive pen of Alex George, the reader is treated to rare insights into the immigrant experience of Middle America. The saga has all the elements of any truly human story: love, hate, death, betrayal and long-held secrets. Frederick Meisenheimer, who wants only to be a good American, is both a genuine and satirical role model. It took this reviewer a while before she got it. But Alex George, like Frederick and Jette Meisenheimer, is himself an immigrant to America, and maybe it takes an immigrant to tell this tale with such captivating humor and pathos.

Midway through the novel, I could almost hear Ethel Merman belting out Let Me Entertain You. It was a bit like getting the rhythm of something you thought you’d heard before, but not quite. They may never play A Good American at a World Series opener, but they should. This book could be a new National Anthem.      –  Sunny Solomon

Sunny Solomon holds an MA in English/Creative Writing, San Francisco State University. She is a book reviewer for “The Clayton Pioneer” and her poetry and other writing has been published in literary journals, one chapbook, In the Company of Hope and the collection, Six Poets Sixty-six Poems. She was the happy manager of Bonanza Books, Clayton, CA and Clayton Books, Clayton, CA. She continues to moderate a thriving book club that survived the closure of the store from which it began. Sunny currently lives next to the Truckee in Reno, NV.
More from this reviewer
PrevYou and Three Others Are Approaching a Lake
The Book of Madness and CuresNext