Home » Reviews » Historical Fiction » The Book of Madness and Cures

The Book of Madness and Cures 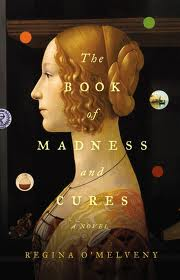 Reading the book cover, I learned I would be following in the footsteps of Gabriella Mondini, and I assumed I would be tracing a map of Renaissance Europe. The main character of The Book of Madness and Cures is a sixteenth-century Venetian woman who has been trained as a physician by her father, a well-respected doctor of his time. Her father has disappeared, and the novel’s search for him takes Gabriella on a journey that extends from Venice to Padua, from Germany to Holland, from Edinburg to Spain, from Morocco through the deserts of northern Africa.

Quickly, I discovered that we were on no ordinary set of travels. Instead, we were lost and found in a world of magical realism, a land of pictorial and philosophical touchstones where Gabriella’s experiences and her imaginings were our alternating guides. Ordinarily I’m not a fan of magical realism, but this story perfectly captures the conundrum of what is real and what is not real and what is more than real, both here on earth and in our minds. I give a lot of credit to Regina O’Melveny’s exquisite prose, which firmly grounds the narrative in the physical world and at the same times soars poetically overhead. “In the sky near Cassiopeia, shooting stars fell like broken lances one after another, piercing the air with stubs of light, repeated on the lake’s surface.” Later, “A scattered snowfall flew here and there, uneven white flakes like bits of charred paper. Night didn’t fall—rather day leached from the air and dark caulked the spaces left behind.”

Cities, such as “Tangier in full view looking like the closed fist of a king, encrusted with dusky sapphires,” metaphorically come to life. Animals are brilliantly rendered, dolphins “gleaming like freshly polished pewter as they leapt in and out of the sea, sewing sky to water.” People are described in words that could be used by an artist, as Gabriella tenderly observes her neurotic mother, her two loyal servant-companions, the many elderly doctors and scientists she meets along the way, the virile would-be suitors she finds most attractive. Indeed, the author cites several paintings that inspired her as she wrote the book. Describing one, Albrecht Durer’s ‘Melancholia,’ O’Melveny believes the “womanly angel “ has been “a muse for me, both winged and earthbound, delineating the journey for my characters.”

If I try to give words to that journey, I will be doing the novel a disservice, for its enchantment and allure resonate within the pages themselves. As compelling as the travels are the letters from Gabriella’s father that are interlaced throughout the narrative, for they offer a quite different point of view. Near lunacy overlaid on profound sanity, I’d say. A further dimension comes with the excerpts drawn from the taxonomy of diseases, madness, and cures that the two Dottores Mondini were compiling together. Here is a window on Renaissance alchemy, viewed through a transcendental filter: ‘The Malady of Mirrors,’ ‘The Plague of Black Tears,’ ‘An invisible worm that consumes the heart.’

I won’t give away the ending of this wonderful story, but it too is a truth-telling fantasy of duties and dreams. Gabriella comes full circle, her days pulsing with life and fading ephemerally into the night. “The moonless blue-black sky hummed with stars that cast their silver through the shadowy palm tree, upon our shoulders, the courtyard, and across the vast dark earth.” Closing the pages of The Book of Madness and Cures, I hated to let her go.     -AR

Ann Ronald is a retired English professor from the University of Nevada, Reno. Author of dozens of reviews, she’s also written a number of books about the American West. They include literary studies such as The New West of Edward Abby and Reader of the Purple Sage, cultural studies such as GhostWest and Oh, Give Me a Home, and nature writing such as Earthtones: A Nevada Album. Her latest is a work of fiction, Friendly Fallout 1953. Since retiring, she’s been reading vociferously, so “Bookin’ With Sunny” is giving her a wonderful opportunity to share thoughts about her favorite new discoveries.
More from this reviewer
PrevA Good American
The Bell RingersNext