Home » Reviews » Poetry » You and Three Others Are Approaching a Lake

You and Three Others Are Approaching a Lake 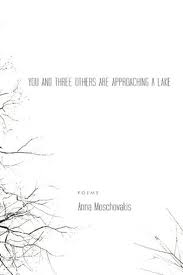 The best reason to belong to the American Academy of Poets is their periodic delivery of books containing the work of new and rising poets. It is both a pleasure and a challenge to acquaint oneself with what is modern and, dare I say it, what is poetry. An MA degree in English/Creative Writing without the F for Fine between the M and the A should be a clear indicator of the distance traveled to reach my own comfort zone for some of today’s poetry.

With that said, those of you familiar with modern poetry can imagine my reaction to receiving a copy of Anna Moschovakis’ James Laughlin Award winning book, You and Three Others Are Approaching a Lake. I read it in almost one sitting. The second reading took a bit longer. Had a few ideas – made a list. Lists are good and often offer an interesting precursor. To what, you might ask? To whatever is present or imagined, and did not exist before the list.

When I was still in grad school, a young Michael Palmer strongly advised us students to omit “I really liked the poem” from any commentary. So, Moschovakis’ poetry worked for me (“worked” became the replacement word for “liked”). As a matter of fact, You and Three Others are Approaching a Lake worked very well for me, which proves that a poet does not have to be particularly accessible to write successful poetry. The title alone seems at once personal and mysterious – You, the reader; Three Others, who are they?; Approaching a Lake, what lake? At the end of the book, after reading through Moschovakis’ Notes and how she came to this work, I wondered if the Notes might have been better presented at the beginning of the book. They are informative and give the reader important background. On the other hand, read at the end, the Notes become an encouragement for a second or third reading.

Moschovakis admits that the book is a mix of both essay and poetry and describes her own writing as beginning “in the experience of discomfort, lack of mastery, or failure, and the decision to interrogate it in language.” You and Three Others are Approaching a Lake is a world created by the poet, but it is also our world, a world of consumption, waste, wealth, and the mystery of how we arrived at this state and what our destination or our own stories might be.

The book begins with a [prologue], a poem starting with a couplet and expanding itself by one line until we reach the last stanza of five lines. Moschovakis writes a near poetic contract: In a perfect world I would be able to convince you of this/…………Everybody should always have a position on everything/We take our positions with us, like folding stools to the beach/……..And I will go with you to the end of this argument/As I have gone with you to the beach/…………And we will pick a street to carry us home/ The [prologue] is a strong and strangely intimate invitation to read what the poet has to say.

The book is divided into five additional poems: Tragedy of Waste, Death as a Way of Life, The Human Machine, In Search of Wealth, and Epilogue. The key to taking this work as poetry is to trust the poet and her use of language as well as your own sense of adventure. She makes use of lists, scripted dialogues, outrageous quotes, found poetry from on-line posts, and powerful references to the economic world of our past and its scientific counterpart that may lie ahead (she has more than a few references to Turin). And although the older reader may feel somewhat lost in the modernity of this work, Moschovakis often moves words from individual lines in and out of her poems in a “nod” to the villanelle. Just as life often turns on itself, the rhythm and words in these poems move in a similar manner.

The thread of language woven by Moschovakis is made up of realism. It is woven into patterns that are explanatory, evocative, sometimes humorous and ultimately into an imaginative work that, in spite of the seriousness of its subject, does not condemn, but is cautiously celebratory.

In her Epilogue the poet brings the reader into both present and future: Science tells us that the speed at which we read indicates we take in/whole words and sometimes whole sentences, complete or incomplete./ But still we type one letter at a time./ One letter at a time we build relationships even though the letter is/only a virtual letter and the labor, such as it is, is free./

Five stanzas later, she closes with: Dear Reader, your documentary is prize winning. It’s your life and/we have come to celebrate it./

You and Three Others are Approaching a Lake deserves its accolades.

Sunny Solomon holds an MA in English/Creative Writing, San Francisco State University. She is a book reviewer for “The Clayton Pioneer” and her poetry and other writing has been published in literary journals, one chapbook, In the Company of Hope and the collection, Six Poets Sixty-six Poems. She was the happy manager of Bonanza Books, Clayton, CA and Clayton Books, Clayton, CA. She continues to moderate a thriving book club that survived the closure of the store from which it began. Sunny currently lives next to the Truckee in Reno, NV.
More from this reviewer
PrevMyrna Loy The Only Good Girl in Hollywood
A Good AmericanNext