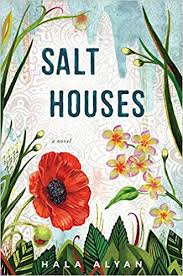 Imagine your family displaced, forced from your family home by political maneuverings and wartime invasions that have little to do with your daily life.  Then imagine the same pattern repeating itself, and repeating itself.   Such is the fate that befalls four generations in Hala Alyan’s novel, Salt Houses.  Over and over the women, their husbands and their children are dispossessed, their homes dissolving like watered salt.

The first loss occurs before Salt Houses begins, after World War II, when the Jewish State of Israel was established.  Salma and her Palestinian family, watching the desecration of their extensive orange groves, fled to Nablus, where they permanently settled. The 1967 incursion into Palestine territory, however, abruptly ended that so-called permanence. At the time, Salma’s grown daughters were in Kuwait.  One was married to a doctor; the other was visiting (perhaps because her husband foresaw the need to escape from Nablus while she could).  The temporary visit soon turned into exile. Alia’s husband, Atef, finally was able to join her in Kuwait. They raised their children in that hot desert climate so unlike their more temperate Palestinian home.  Enter, the Iraqi forces of Saddam Hussein.

Suffice to say, once again the family must leave everything behind and start anew.  In Amman, where Jordan suffered civilian bombings in 2005.  A year later in Beirut, where an Israeli bombardment brought the Lebanese city to a temporary standstill.  By now, the fourth generation of this afflicted family is being affected by the ongoing warfare in the Middle East.  Alyan tells their stories in focused vignettes, poignant moments of crisis that mature the characters and change their lives.

Salt Houses is not a war novel, however.  Rather, it is a domestic investigation of how war intrudes on innocent lives, especially on women’s lives.  First Salma, then her daughter Alia, then another generation of daughters and cousins struggle to make homes for their husbands and children while cities explode around them.  The result is more tears than blood, day-to-day emotional survival rather than battlefield valor.  In fact, Alyan creatively devises a technique for holding the bloodshed at arm’s length.  Several of the incursions are viewed from afar.  Alia, for example, watches the invasion of Nablus on her sister’s television set in Kuwait.  Her daughter, Souad, is in France attending summer school when the invasion of Kuwait occurs.  Like her mother, Souad watches the unfolding events on a television, this one from a Paris bar.

Since the point of Salt Houses is to uncover the psychological effects of uncertainty and displacement, Alyan does not delve into physical suffering, starvation, or ensuing poverty.  Salma, Alia, Souad, their siblings and their cousins, are high-functioning members of the upper middle class. Able to escape their plights with intact bank accounts and savings, readily employable, they worry little about money, about food on the table, about where they might live next.  Building a new house is more a psychological hurdle than a logistical one.  Saving that new house from dissolving like salt is the crux of their conundrums.

One more key ingredient of this novel is the way it centers the Palestinian experience.  I have thought about the displaced Palestinians in an abstract way, wondering how they felt when Israel was established in their homeland or how they still feel as the West Bank inhabitation strengthens.  Salt Houses put a specifically human face on my abstractions.  So I highly recommend Hala Alyan’s first novel, which helps us interpret Middle Eastern conflicts differently, domestically, deeply.   -Ann Ronald 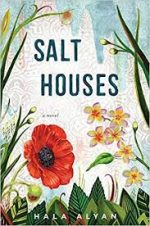 Ann Ronald is a retired English professor from the University of Nevada, Reno. Author of dozens of reviews, she’s also written a number of books about the American West. They include literary studies such as The New West of Edward Abby and Reader of the Purple Sage, cultural studies such as GhostWest and Oh, Give Me a Home, and nature writing such as Earthtones: A Nevada Album. Her latest is a work of fiction, Friendly Fallout 1953. Since retiring, she’s been reading vociferously, so “Bookin’ With Sunny” is giving her a wonderful opportunity to share thoughts about her favorite new discoveries.
More from this reviewer
PrevSetting Free the Kites
The Long Goodbye: Khe Sanh RevisitedNext