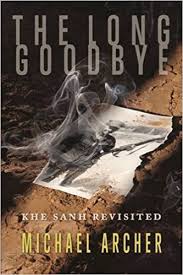 The Long Goodbye is a finely-honed award-winning sequel to Archer’s A Patch of Ground, a memoir of Archer’s seventy-seven horrendous combat days during the siege of Khe Sanh beginning in early 1968. Because Archer is a fine storyteller and an adept historian, it isn’t necessary to have read Patch before reading The Long Goodbye. Goodbye provides the necessary background. This memoir/history has at its heart the exploration of the life and death of his boyhood friend and fellow Marine, Tom Mahoney. While Patch explores Archer’s experiences and reactions at Khe Sanh, Long Goodbye focuses on Mahoney’s life, 1968 death, and the nearly five decades of memories since.

Archer provides a sophisticated context and framework for writing about his friend. The context is a nuanced one. For starters, he neither begins nor ends his book as an unabashed defender or critic of the Vietnam War. In 1967, he believed he was doing the right thing by joining the Marine Corps. Going to Vietnam, then, was almost the inevitable consequence of enlistment although he hadn’t thought much about consequences. After all, he was only nineteen. One of his friends and fellow Khe Sanh survivors ultimately became an unabashed critic of the war, but Archer never goes quite that far. He comes to believe, some years later—after a ton of reading, reflection, and maturation—that the various battles associated with Khe Sanh during the first six months of 1968 were unnecessary. They resulted primarily from the strategic ineptitude, tactical blindness, and self-centered careerism of US General William Westmoreland, the American commander in Vietnam. Archer asserts that he and his fellow Marines, living and dead, were the victims of Westmoreland’s command failures.

Archer’s framework in Goodbye might be described as archeological. He digs through the layers of time before, during and after Khe Sanh, but his layers are not the earthy ones of classical archeologists. He mines and sorts through layers composed of various documents (personal and official letters, official combat reports from both Americans and Vietnamese, and reports written by forensic investigators) and the memories of himself, friends, family, Marines, and North Vietnamese. Memories are crucial to his exposition. As we know memories are not always reliable; every time a memory is brought up it is apt to change slightly, like a barnacle adding more crust. Putting these documents and memories into their proper sequence allows Archer to trace his and others’ attempts to find out when, how, and if Tom Mahoney died. It is a process that allows the reader to experience the emotional ebbs and flows that are central to this story, one filled with ambiguity.

Through it all, Archer remains loyal to the Marine Corps. For him, Semper Fi is more than a bumper sticker. It is the credo underlying an ethic that reverberates like a heartbeat through The Long Goodbye. His loyalty to the Corps necessitates the addition of a seemingly discursive chapter about atrocities in Vietnam. He successfully relates that chapter to his main theme by tying it to what he experienced on his return to the US —being called “a baby killer.” That phrase, as it turns out, may also have had a central role in Tom Mahoney’s last known day on earth, July 6, 1968.

I have known Mike Archer for more than a decade. Intermittently we get together for pizza, beer, and engaging conversations. Although I was not a Marine, I still consider him a brother in the band of historians. I keenly anticipate discussions with him about the PBS/Ken Burns documentary on Vietnam.   – Neal Ferguson

Also available by Michael Archer: A Patch of Ground; A Man of His Word. 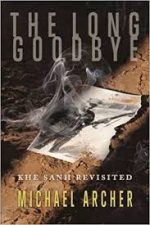 Neal Ferguson is a self described Anglo-phile. After studying for a PhD in British history and doing research for a year in various British archives, he came to the University of Nevada in 1970 to teach. Soon he found himself in administration where he remained until 2003. After returning to full-time teaching a decade ago, he decided to concentrate his teaching energies on Medieval British history and various global aspects of World War II. Dedicated to Ambrose Bierce’s proclamation that the purpose of war is to teach Americans geography, Neal insists that his students accompany him (in class) to sundry east European rivers and steppes, African deserts and jungles, south-east Asian mountain ranges and peninsulas, and small islands and coral reefs in the Pacific. Currently he is writing a book about the ups and downs of General Douglas MacArthur’s military reputation.
More from this reviewer
PrevSalt Houses
The Second Mrs. HockadayNext