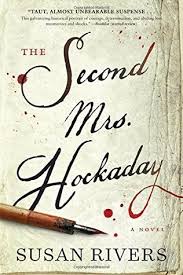 Belonging to the Clayton Community Library Book Club has its perks. Members now spread the wealth by bringing in books they’ve read and want to share. That’s how I got a copy of Susan Rivers’ debut novel, The Second Mrs. Hockaday. Lucky me!

Rivers has written one of the best epistolary novels I’ve ever read. A story told through letters can often be tiring, but Rivers keeps this Civil War narrative moving at an incredible pace. In between the letters are journals, newspaper articles and court documents. The tale is based on a true event involving a married woman who, while her husband is off fighting the war, gives birth to an illegitimate child who dies shortly after birth. It is a love story, a war story, and a morally confusing mystery relating to who fathered the child as well as how did the infant die.

It begins with a letter written from a South Carolina courthouse in 1865. The letter is to Mildred, the beloved cousin of Placidia Fincher. Placidia writes of meeting Major Hockaday, hinting at how taken she was by his manner and bearing. She also shares the fact that her doctor has told her she is not likely to remain in jail for long. She then asks her cousin to send a dress and some writing paper. The reader, so taken with Placidia’s feelings for Major Hockaday, is almost jolted to remember she is in jail. Why? What has she done? Whatever the crime, romance exists, and it does so along with dark family secrets, all fodder for the staunchest mystery lover.

Young seventeen-year-old Placidia, after a whirlwind encounter with the much older and widowed Major Hockaday, agrees to marry him and move to his farm where his infant son is in the care of a house slave. Placidia, an atypical southern belle, is animal smart (rides and probably breaks horses), articulate, and believably aware of her sexual awakening. Two days into the marriage, her husband is called back to the front, and she is left to deal with his infant son and to manage his farm and slaves.

The story moves through the early part of her two-year separation from her husband. Her relationship with her sister, her father, and her cousins gives the reader an in-depth look at a cast of characters fighting more than the Civil War. She has few letters from her husband and life on his farm is not easy. Weather, outlaws, and family deception and avarice create years of chaos and doubt that she has married well.

The reader is left guessing and re-guessing almost to the end. Who was the father of the child? Was the child’s death murder? When Hockaday returns at war’s end to find his wife in jail, will he divorce her? Will there be a future for their marriage?

Rivers writes a tight tale with believable characters and history to back up the depth of her narrative. Enslavement comes in all colors, and war casualties are not always found on the battlefields.  – Sunny Solomon 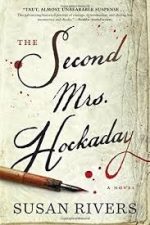 Sunny Solomon holds an MA in English/Creative Writing, San Francisco State University. She is a book reviewer for “The Clayton Pioneer” and her poetry and other writing has been published in literary journals, one chapbook, In the Company of Hope and the collection, Six Poets Sixty-six Poems. She was the happy manager of Bonanza Books, Clayton, CA and Clayton Books, Clayton, CA. She continues to moderate a thriving book club that survived the closure of the store from which it began. Sunny currently lives next to the Truckee in Reno, NV.
More from this reviewer
PrevThe Long Goodbye: Khe Sanh Revisited
The Art of Misdiagnosis: Surviving My Mother’s SuicideNext