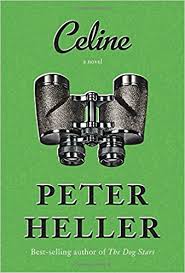 Each of Peter Heller’s three novels sends dissimilar characters in wildly diverse directions.  Yet there is a thematic consistency between The Dog Stars and The Painter and, now, Celine.  Each plot involves a quest.  Each protagonist pursues an almost impossible goal, tilts at contemporary windmills along the way, satirically amuses the reader (and I suspect amuses the author, too), and succeeds satisfactorily (if not definitively).

Celine features a sixty-eight-year-old artist, a wealthy member of an elite East Coast family who eccentrically constructs sculptures from skulls and fur and whatever else comes to hand.  Celine also has long pursued a second career as a private investigator.  She only takes cases that involve Lost Causes, reopening decades-old unsolved mysteries of birth and inheritance and family secrets. Her partner, sometimes called her Watson, is her husband, a taciturn Maine man with a flair for tracking down obscure information.  The two have other skills, too, which devolve as the mystery deepens and which are too much fun to reveal in a review.

Shortly after a spread about Celine’s unique career appears in a Sarah Lawrence alumni magazine, she receives a phone call from a young woman whose father apparently was mauled by a rogue grizzly two decades earlier. The circumstances of his death were peculiar, and his body was never found.  Gabriela, another Sarah Lawrence alum, wants Celine to return to the Montana scene and figure out the truth of her father’s demise.  So Celine and Pete fly to Colorado, borrow her son’s fully-outfitted camper, and drive north in the chill of late September.

As they drive, stories from Celine’s youth interlace with the events of the current quest.  Those stories of her past involve an unexpected pregnancy and Celine’s own father’s absence.  The details differ, but certain thematic constants between her life circumstances and Gabriela’s are clear.  The reader learns about Celine’s previous cases as well, reuniting birth families at an astonishing 96% success rate. She and Pete are a very effective team.  For example, they soon detect that a young man is following them to Montana. After he camps nearby one night, Celine marches over to his campsite the next morning. Her robe barely covers the Glock in its shoulder holster, and her exquisitely made-up face barely disguises her sassy behavior. “If you know where we’re going, why not just meet us there?” she asks. Noting that he uses pre-ground coffee, she gives him her own battery-powered grinder, an extra, she says, so he can freshly grind his own beans.  Later, she and Pete track the stranger from a honing device carefully embedded in the coffee grinder.

I noted earlier that their talents are amazing.  They’re entertaining, too.  Even though the novel’s mystery is a serious puzzle, and even though Celine and Pete find themselves in sequentially precarious situations, their actions and their solutions are often downright laughable.  As I turned the pages, I found myself smiling again and again.  Celine may pretend to be an incompetent senior citizen, but her funky behavior gets results.  Dressed like an aristocrat with too much money and too little taste, she prods potential witnesses, confronts burly bikers in a bar, manipulates government officials, and keeps her eye constantly on her quest to find the truth.

Since each Peter Heller novel features a different protagonist and a different setting (although all three take place in the American West), I suspect we won’t encounter Celine again.  Too bad!  I’d love to follow her and her remarkable husband on more Lost Causes. However, Heller does end Celine by tantalizing the reader. “Will you keep looking?” Pete asks.  “I am looking every day,” Celine responds. “I never stop.”    – Ann Ronald 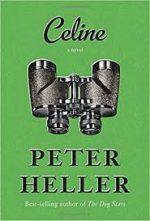 Ann Ronald is a retired English professor from the University of Nevada, Reno. Author of dozens of reviews, she’s also written a number of books about the American West. They include literary studies such as The New West of Edward Abby and Reader of the Purple Sage, cultural studies such as GhostWest and Oh, Give Me a Home, and nature writing such as Earthtones: A Nevada Album. Her latest is a work of fiction, Friendly Fallout 1953. Since retiring, she’s been reading vociferously, so “Bookin’ With Sunny” is giving her a wonderful opportunity to share thoughts about her favorite new discoveries.
More from this reviewer
PrevA Fine Imitation
Setting Free the KitesNext