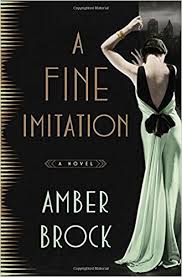 While reading Amber Brock’s novel, A Fine Imitation, I kept thinking of Robert Frost’s poem, “The Road Not Taken.”  Vera Longacre Bellington, Brock’s very rich and very proper protagonist, must make momentous choices, and the author teases the reader with possible outcomes that may transpire.  The reader can guess what decisions Vera Longacre will make when she is a senior at Vassar because the reader knows Vera Bellington’s situation a decade later. But the reader only gradually finds out all the subsequent ramifications and repercussions.

In alternating chapters, A Fine Imitation oscillates between 1913 and 1923.  Raised to exemplify proper societal behavior and trained to obey without question, the collegiate Vera follows her mother’s lead and the married Vera defers to her husband’s wishes.  At Vassar, Vera’s temptations are hardly risqué—a night out, a football weekend in New Haven, her mother’s permission slip forged.  These events, however, give the reader insights into Vera’s acquiescent personality.  We learn her weaknesses, and we watch how powerful expectations dictate her fate.

Ten years later, Vera finds herself in a loveless marriage, wedded to a man who puts business first and who pays little attention to his wife.  Vera and Arthur live in the penthouse of a Park Avenue apartment building that Arthur designed and built.  At an in-house party one evening, the residents decide the pool room needs a mural on its walls.  Even when sober the next morning, the ringleaders set their frivolous notion in process. When the painter arrives from Italy, he turns out to be a man of mystery.

The residents are forbidden to use the pool while Emil Hallan is working on his masterpiece.  They cannot even open the door to peek at his progress.  And despite their concerted efforts, Hallan refuses to reveal any personal information.  Several of the bored housewives flirt with the painter, to no avail.  Vera keeps her distance, to no avail.  Finally, the residents grow suspicious of their artist, and hire a private investigator to look into his background.  The detective, of course, quickly unearths Vera’s feelings for Hallan. This leads to a set of crises and related decisions that eerily reflect the situations posed a decade earlier.  Once again Vera must choose one road or the other.  Whichever way she goes, she’ll never know what might have happened along the alternate route.  As Robert Frost so wisely understood, going one direction and not the other will make “all the difference.”

Whenever Vera must make an irrevocable choice, Amber Brock knows how to heighten the suspense.  The reader feels Vera’s angst as she weighs one option versus another.  Those options are complicated not only by Vera’s psychology, but also by her sense of morality.  A Fine Imitation is by no means a shallow novel.  Rather, the author probes the ethics and scruples of an entire generation, using Vera as a pawn.  Neither is Vera a shallow character.  A student of art history, her artistic perceptions are acute.  Recognition of her artistic wisdom draws Hallam to her in the first place and sets the novel’s plot in motion.  Thanks to Brock’s imagination and talent, what could be just another piece of female fiction, of predictable ‘chic lit,’ is far smarter and more thought-provoking. This reader, at least, finished A Fine Imitation feeling profoundly satisfied.    –  Ann Ronald 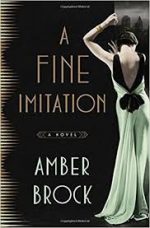 Ann Ronald is a retired English professor from the University of Nevada, Reno. Author of dozens of reviews, she’s also written a number of books about the American West. They include literary studies such as The New West of Edward Abby and Reader of the Purple Sage, cultural studies such as GhostWest and Oh, Give Me a Home, and nature writing such as Earthtones: A Nevada Album. Her latest is a work of fiction, Friendly Fallout 1953. Since retiring, she’s been reading vociferously, so “Bookin’ With Sunny” is giving her a wonderful opportunity to share thoughts about her favorite new discoveries.
More from this reviewer
PrevTwenty-six Seconds
CelineNext